Do Your Own Thing

August 18, 2019 Vita Historia
“You, who are on the road,
Must have a code
That you can live by.
And so become yourself
Because the past is just a goodbye.”
— Opening lyrics of “Teach Your Children”, written by Graham Nash.

Organizers of Woodstock 50 have canceled the event scheduled for this weekend that was intended to commemorate the 1969 concert on a scale commensurate with the original. There were mounting difficulties in putting together the 2019 concert, and at the end of July the organizers threw in the towel. Instead there are small scale events scheduled for the weekend that have been organized by the Bethel Woods Center for the Arts near the site of the 1969 concert, and there are also some informal events happening at the original site.

It’s just as well Woodstock 50 fell through the cracks, because these continuing reboots of past successes have become tiresome and shallow scavenging for meaning grafted Frankenstein-like onto the present, as if clinging to the past would revive only the good times. For the promoters of such events and movies and television shows like them, there is profit to be made borrowing on memories. And since people continue paying for these popular culture revivals, there is no reason for promoters and Hollywood producers to stop digging up old things, slapping a modern sheen on them, and charging admission to the public for the dubious enjoyment of reliving the old days. 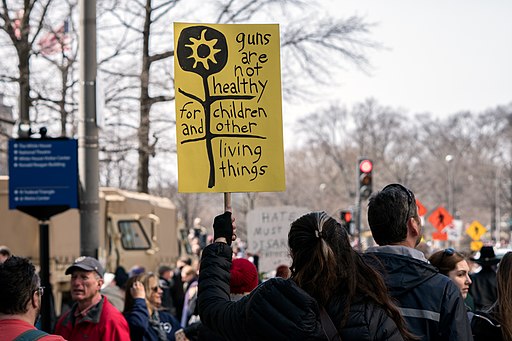 A protester holds up a sign at the March for Our Lives demonstration in Washington, D.C., in March 2018. Photo by Flickr user Lorie Shaull.
Let the past be past. “Why seek ye the living among the dead?” (Luke 24:5). Let the past be its own thing. For the important things that face everyone today and in the future, it appears children are taking the lead, while adults around them are either in denial or slogging along, many of them disheartened and looking in the wrong directions for answers. In the last couple of years, youngsters have marched in protest against legislators who drag their feet in addressing gun violence, and have struck from school and marched in protest against legislators’ unwillingness to effectively tackle climate change.

Swedish teenage climate activist Greta Thunberg is now on a sailboat crossing the Atlantic Ocean in order to attend the United Nations Climate Change Summit in New York City next month. She started striking from her school in Sweden last August, founding the Youth Strike for Climate movement, and she has attracted so much attention to the cause since then that earlier this year three Norwegian parliament members nominated her for the 2019 Nobel Peace Prize. If she wins, she would join 2014 winner Malala Yousafzai of Pakistan as the second teenage activist to win the Prize. 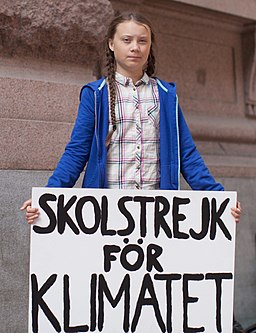 Greta Thunberg with her sign outside the Swedish parliament building in August 2018. The sign reads “School Strike for Climate”. Photo by Anders Hellberg.
More importantly, she will gain international validation for the cause, an essential step in repudiating and ultimately sidelining the hateful antagonism of skeevy jackasses such as British businessman Arron Banks, who tweeted to Ms. Thunberg as she set off on her Atlantic cruise “Freak yachting accidents do happen in August.” He later claimed his vile suggestion was “a joke.” Ha ha. It was a joke like the 2016 campaign trail hint from the skeevy jackass now occupying the Oval Office was a joke when he floated the idea of “Second Amendment people” assassinating his Democratic Party rival. Ha ha.
Make no mistake about it – when Greta Thunberg arrives in this country, the Oval Office Blowhard will heap scorn, derision, and personal insults on her simply for defying the power of entrenched interests in the fossil fuel industry, and his morally bankrupt cult followers will cheer him on because he will frame his invective as salvos in another battlefront of the culture war against politically correct liberals. Never mind that she is a mere child. Never mind that what she has taken upon herself is simply bringing to everyone’s belated attention the scientific fact that our house is on fire and we have to do something about dousing the flames now, not stand around arguing about it as the fire engulfs us. For bearing that unwelcome news, they will heap abuse upon her, and not reflect for even a moment on what they are teaching the children of the world.
— Vita