Under the Fig Tree

August 11, 2019 Isidore Gnome
Figs are ripening now all across the southern United States, and by September the figs in the northern half of the country will ripen. If a gardener has 20 to 30 square feet to spare outside, preferably in a sunny spot protected from cold winter winds, then planting a fig tree would be a productive use of that space. For the gardener who doesn’t have enough outdoor space, then planting a dwarf fig tree in a pot and setting it by a sunny window is a great way to get plenty of fruits (technically a fig is not a fruit, but a fleshy stem with multiple ingrown flowers), and without a great deal of fuss over pests, diseases, and special requirements. 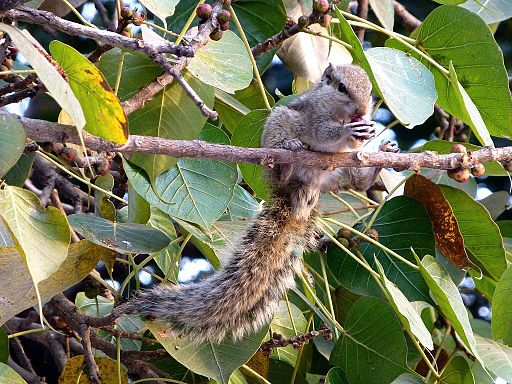 A squirrel nibbling a fig in the Bodhi Tree at the Mahabodhi Temple in Bodh Gaya, Bihar state, India. Photo by Flickr user Anandajoti.
A self-pollinating dwarf fig variety does not require a tiny wasp to pollinate it, unlike varieties such as Smyrna figs. Contrary to common belief, most figs commercially available these days, either as fresh or dried fruits in grocery stores, or as plants for sale to home gardeners, are self-pollinating varieties and therefore it is unlikely consumers will eat a tiny, imprisoned wasp in a fig. Even if they did, there’s no harm in it, and anyway the enzymes produced by the ripening fig will have dissolved the wasp by the time the fig is ready for consumption. That delicate crunchiness inside any ripe fig generally comes from the seeds, and rarely from an insect exoskeleton.
In growing figs outdoors, southern gardeners have a big advantage over northern gardeners because they have to do relatively little to protect their trees from winter cold. Wrapping the branches in burlap and perhaps adding a layer of mulch around the roots are all that is required in the South. There will be some branch die back even so in an average winter, but usually nothing like the major losses incurred by fig trees in the North unless gardeners lay the trees down in trenches and pile mulch and wind protection on top of them.
For a 2017 album, Blakey Morton performed Scott Joplin’s 1908 song “Fig Leaf Rag”.
Once a fig tree has established a vigorous root system over the course of five to ten years it can withstand die back of the entire above ground portion and still bounce back in the spring with enough new growth to produce fruit later in the summer. But the difficulty in the North is that without sufficient winter protection the roots themselves may die, and of course that is the end of the tree. Italian immigrants to the northeastern part of the country deemed the extra work worthwhile for the sweet figs they could pluck off their own trees at the end of summer, and they introduced the practice of laying the trees down in winter when they first started arriving in this country in the late nineteenth century. The people of this country, almost all descendants of immigrants themselves, can surely appreciate the sweet taste of the fig along with its rich lore and its association with other immigrants and their generous sharing of knowledge; and since a fig is much more in cultures around the world than a simple fruit, perhaps the people of this country of immigrants can even find enlightenment under the fig tree, wherever it grows.
— Izzy