August 4, 2019 Vita Historia
Roger Ebert, the great movie critic who worked primarily in Chicago, Illinois, and over the course of his career garnered respect and influence internationally, believed movies were “like a machine that generates empathy”. By that he meant a well-made movie encourages viewers to lose themselves for a time and step into the shoes of others. There were more movies like that being made 50 years ago than there now, in the current era of comic book special effects franchises. 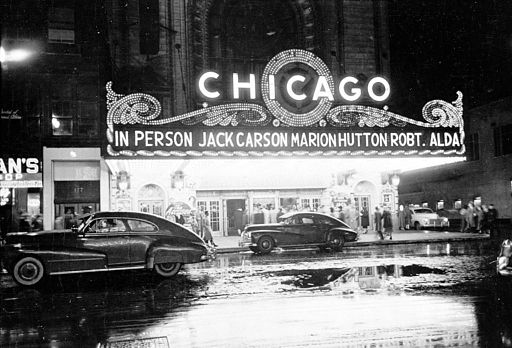 Stanley Kubrick took this photo in 1949 for LOOK magazine. Mr. Kubrick was a staff photographer for the magazine from 1947 to 1950, and he then went on to direct many great movies, becoming a model for other filmmakers of the New Hollywood. The Chicago Theatre was one of many movie palaces built around the country in the 1920s, and after renovations in the 1980s, it remains a popular venue for film exhibitions and live performances.
Mr. Ebert became the film critic for the Chicago Sun-Times newspaper in 1967, about the same time as the emergence of New Hollywood filmmaking, an era lasting roughly from 1965 to 1985 when Hollywood studios financed character driven films made by directors like Mike Nichols, Bob Rafelson, and Francis Ford Coppola, who came from backgrounds in theater, television, or film school. Filmmakers in Old Hollywood often came up through the ranks, and many of them were refugees from Europe, escaping the fascist regimes spreading throughout the continent in the 1920s, ’30s, and early ’40s.
Old Hollywood was vertically integrated, meaning the studios controlled production and distribution and held talent under long term contracts. All that started to fall away in the 1950s when the federal government forced the studios to divest themselves of most of their wholly owned distribution channels, which had behaved as a cartel, and as television poached audience share from the movie industry. Some star actors and directors cut themselves loose from the major studio system, forming ad hoc film companies which sought limited input from the big studios. Finally, in order to compete with television, studios more frequently rolled the dice on big budget spectaculars such as Ben-Hur or Cleopatra, and those high stakes gambles either saved financially unstable studios or sank them nearly to insolvency.

By the late 1960s, the movie studios primarily served as film financers and weren’t as heavily involved in production and distribution as they once were. Along with discarding the Hays Code of movie censorship, a relic of Old Hollywood, the changed paradigm of filmmaking allowed greater freedom and creative control for directors, actors, and writers. The result was the flowering of small to medium scale films that became the hallmark of the New Hollywood, films such as The Graduate and Bonnie and Clyde, both released in 1967, and continuing with other great films made for adult sensibilities through the 1970s.

Jack Nicholson had a breakout role as an alcoholic civil rights lawyer in the 1969 film Easy Rider, directed by Dennis Hopper, who also starred in the film along with co-writer Peter Fonda. In taking on multiple tasks in the making of Easy Rider, Mr. Hopper and Mr. Fonda were more typical of New Hollywood than they were of Old Hollywood, where vertical integration assigned discrete tasks to different individuals within the studio system, and auteurism was discouraged by studio bosses who were leery of the practice ever since Orson Welles made Citizen Kane in 1941.
Jack Nicholson was the actor who became the face of New Hollywood filmmaking, simply because he was in more hit movies than anyone else during that time. His face, voice, and acting style and choices personified the New Hollywood era. Starting with Easy Rider in 1969, Mr. Nicholson was in one successful movie nearly every year, and in some years more than one, through the 1970s and into the ’80s. He has of course been in many successful films since then, and what is remarkable in retrospect from today’s vantage point when big budget sequels and reboots of franchises are Hollywood’s major output is that he has never repeated himself nor acted in one of those kinds of movies.

Since the demise of New Hollywood filmmaking, Jack Nicholson has chosen to stay with character driven films, though the number available for his participation diminished over the years, as he related in a 1995 interview with Roger Ebert. Even Tim Burton’s 1989 film Batman, in which Mr. Nicholson played The Joker, can be seen as character driven despite its comic book origins and inclusion of special effects. It was the first film of its kind to take the source material seriously, and it was well-made by some exceptional talents.

In a later scene in Easy Rider, Jack Nicholson’s character, George Hanson, discusses the state of the country with Dennis Hopper’s character, Billy.

Unfortunately the endless variations on Batman in the 30 years since its release have grown wearisome. But the movie that started the push for a return to blockbuster filmmaking came out 14 years earlier, in 1975, when Steven Spielberg’s film Jaws appeared in theaters that summer and set box office records. Jaws was followed in the summer of 1977 by Star Wars, a film created and directed by George Lucas that started a media franchise which continues to this day. Those films, too, were well-made by exceptional talents. In the years since their release, however, those kind of films and their lesser cousins have increasingly crowded out the kind of smaller, character driven movies Jack Nicholson and the New Hollywood were known for, the kind Roger Ebert described as generators of empathy. In times when we are in need of empathy generators perhaps more than ever, we are largely left to project ourselves onto special effects beclouded superheroes.
— Vita