July 11, 2019 Editor
A federal judge ruled recently that the city of New Orleans violated the First Amendment rights of street artist Cashy D and property owner Neal Morris when the city censored a mural painted by Cashy D on Mr. Morris’s property for the NOLA (New Orleans, Louisiana) Mural Project. The mural in question quotes off camera remarks made by the current president when he was still a private citizen to Access Hollywood host Billy Bush. Those were the infamous “grab ’em by the p*ssy” remarks. For the mural, Cashy D painted pictograms to stand in for some of the words, and it was supposedly one pictogram in particular that some citizens and the city objected to, taking their case to court.

In a case like this, it’s probably impossible to separate politics from concerns about public display of lewd images. People engage in political displays on their own property all the time, the most prevalent example being electioneering signs. Those signs typically do not contain lewd images or profane language, though it’s possible some homemade versions might. Art displayed on private property where it can be viewed by the public is often subject to local zoning and nuisance regulations. The NOLA Mural Project artwork is a political statement expressed on private property within public view, and any lewd images and profane language it contains are directly related to the quotation from the political figure the creators are criticizing. 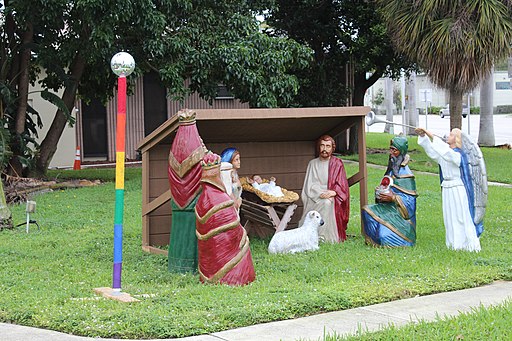 A Gay Pride Festivus Pole and Nativity Scene on public display on private property in Deerfield Beach, Florida, in 2015. Photo by DavidCharlesFLA.
Simple as the language of the First Amendment to the Constitution appears, it is amazing how many different interpretations it has engendered over the years. It would seem fairly cut and dried, but obviously it is not, according to the nation’s judiciary. First Amendment cases decided one way by a lower court are often as not overturned by a higher court, an outcome that wouldn’t appear likely if it were not for the fallibility of judges and the judicial process, and the malleability of the law itself.

The current president may have made his foul remarks in private as a private citizen, but the way the American political game is played, he and his history became fair game once he entered public life, and remarks like those quoted in the Cashy D mural are indicative of his character, or lack of it, and become part of political discourse, their very offensiveness being the whole point of the mural. Political expression on public view from a private space is subject to interpretation and possible censure by the public, and its merits are therefore best judged on a case by case basis in the courts, as they should be, and not by bureaucrats and politicians in city halls around the country.
— Ed.