July 7, 2019 Isidore Gnome
Americans have become spoiled by the year round availability of produce at the supermarket. The tomatoes available in the store most of the year are hardly worthwhile, but there they are nonetheless, waiting for shoppers who have no other option. Summer is the time for homegrown tomatoes, which definitely are worthwhile, however too many Americans appear to carry over the habits they’ve learned from grocery shopping and believe they should be able to harvest tomatoes from their small patch of a few plants nearly every day all summer long. It’s as if they thought someone might be hiding throughout the day near the tomato patch and coming out under cover of darkness to restock their plants with newly ripened fruit, and just enough to satisfy the consumer’s need for the day.
That would be a pleasant scenario, but unfortunately it’s a pipe dream. There are only two factors broadly setting the pace for when tomatoes ripen and in what quantity, and they are the genetics of a determinate versus indeterminate tomato plant, and the weather, particularly temperature. A determinate tomato plant grows to a point of maturity, sets fruit, generally earlier in the summer than other tomato plants, and then goes dormant. An indeterminate tomato plant continues growing, vine-like, throughout the summer until frost, and sets fruit sporadically from mid-summer on, although the fruits borne late in the season as cool weather approaches may not ripen on the vine. 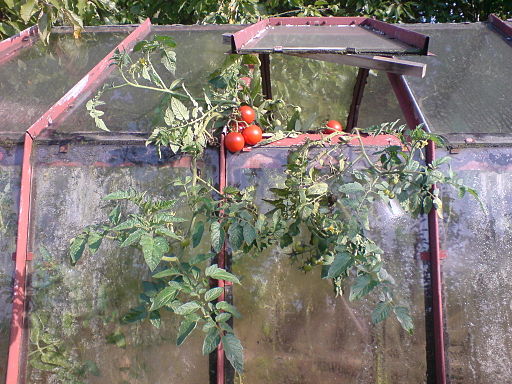 Growing tomatoes in a greenhouse or cold frame is a way to extend the season by exerting more control over growing conditions than can be had by subjecting the plants to nature. Photo by Fredy.00.
Temperature as a determining factor for tomato plants setting fruits and ripening them is important across the board, no matter what type of plant, whether determinate or indeterminate, or whether the grower advertises a particular plant as an early, late, or mid season variety. Nighttime temperatures below 55 degrees are no good, as are daytime temperatures above 85 degrees. Everything else is meaningless if the temperature does not reside within that sweet spot, that Goldilocks zone. Growers of hothouse tomatoes know this better than anybody. Yet year after year home growers select their tomato plants at the garden center each spring with a plan of spreading out the harvest throughout the summer based on type of plant and promises made by the seller of when to expect the harvest to begin.

There will be some variation in growth early in the season when planting a patch of a few tomato plants, and staggering planting dates may be of limited utility early on as well. As summer progresses, though, and hot weather takes over day after day, all the plants will end up near the same stage of growth at the same time, and the poor gardener, whose best laid plans called for perhaps only a few ripe tomatoes each day from June through September, instead finds himself or herself with an avalanche of ripening tomatoes in July and August, or hardly any at all. These are the risks of subjecting our desires to nature’s control, rather than going to the supermarket to buy a lackluster but sturdily dependable tomato.

What to do? If enough space is available, put in more than a half dozen plants, even if that means a potential glut of tomatoes in a bumper year. More plants is good insurance against a bad year and brings the dream of an evenly spaced harvest closer to reality. Put those plants in slightly different locations, varying the microclimate for each plant, rather than subjecting all of them to the exact same conditions, and potentially the exact same problems. Spread them out if there’s space available. Tomato plants should get at least six hours of sunlight each day, but the kind of sunlight matters a great deal. All tomato plants like to get early morning sun to dry the dew off their leaves. In the South, they appreciate shade from the hottest afternoon sun.

John Denver performed the Guy Clark song “Homegrown Tomatoes” for his 1988 album, Higher Ground, and the song then appeared on his 1991 compilation album, Take Me Home, Country Roads.

If not much space is available, put in as many plants as possible without crowding them, which leads to poor air circulation and consequent fungus and blight problems. Use deep containers with adequate drainage, and mount them on wheels to make it easier to take advantage of varying light as summer progresses. Above all, stop looking at the tomato patch as a supermarket produce section where the fruit appears only as required. Outside under the hot sun, through irregular rain showers and storms, and at the mercy of pests and competing weeds, the tomato plants are taking their own sweet time and are subject less to the gardener and more to nature. If it seems like having only two or three plants makes for a Goldilocks garden, where everything has to be just right to get a spread out harvest, or even any ripe tomatoes at all, then diversify and put in more plants in more spaces. What ripe fruits you get will always be better than supermarket tomatoes and well worth the effort, and you shouldn’t have too much trouble finding takers for the surplus in good years.
— Izzy