June 30, 2019 Vita Historia
“Let me know when the jail sentence starts.”
— Kellyanne Conway’s contemptuous response to a reporter asking about her repeated violations of the Hatch Act.

Of course White House counselor Kellyanne Conway knows perfectly well there are no criminal penalties for violating the Hatch Act since it is purely an administrative prohibition. Government employees can be reprimanded or fired for violating the Hatch Act, or assessed a fine up to $1,000. There are other disciplinary penalties that the Office of the Special Counsel (OSC) can recommend as well, but none of them include filing criminal charges. The difficulty in disciplining Ms. Conway, however, is that the Hatch Act as currently constituted only allows the OSC to recommend to the president that he fire her, and can do nothing on its own to remove her because she is a political appointee. As applied to Ms. Conway then, the Hatch Act is toothless as long as the president backs her, and she is also very well aware of that fact.

The Hatch Act was pushed forward in 1939 by New Mexico Senator Carl Hatch in response to overt politicking on the job by employees of the Works Progress Administration (WPA) under the Democratic presidential administration of Franklin Roosevelt. It is interesting to note Senator Hatch was a Democrat. Apparently the sentiment at the time was that putting a stop to politicking by federal employees on the taxpayers’ dime was worth bipartisan support. Congress has amended the Hatch Act twice since 1939, though always the toothless nature of the penalties for higher ranking government officials has stood, and as a result presidents have often refused to abide by disciplinary recommendations left up to their discretion. 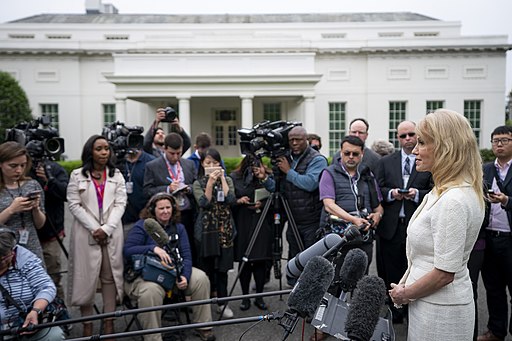 Kellyanne Conway speaks to the press outside the West Wing of the White House in May 2019. Official White House photo by Tia Dufour.
It’s no surprise the current president has dismissed the recommendation by the OSC that he fire Kellyanne Conway for her repeated violations of the Hatch Act and her disdain of ethics restraints. She is the kind of person he likes best – loyal to him and, when speaking for the administration, a bullsh*t artist, for lack of a more polite phrase which adequately describes her role and abilities. “Spin doctor” doesn’t quite convey her proficiency at spewing outlandish lies, a talent for which her only rival is her boss, the current president. The Oval Office occupant has couched his objection to the OSC recommendation as a violation of Ms. Conway’s free speech right, a dubious argument the Supreme Court has shot down numerous times before in regard to enforcement of the Hatch Act. Government employees are free as always to speak their minds on their own time, but in their official capacity they work for everyone in the country, not merely one political faction.

The people staffing the current presidential administration have little regard for the rule of law as applied to them, and certainly not for an Act dealing with professional ethics that has no legal bite to it. This attitude and tone is set by the current president, for whom laws and ethics and the truth are malleable when applied to him and those he likes. Past presidents and their staffs had at least some little sense of shame, which is apparently what Congress hoped for in 1939 when they passed the original Hatch Act in 1939. Congress must have hoped for voluntary compliance under the pressure of public shame and political calculations. They did not foresee an administration that behaved utterly without shame and invented alternative facts.

Michelle Wolf comments on Kellyanne Conway in this clip from a February 2017 episode of The Daily Show, hosted by Trevor Noah. Warning: foul language.

The worst actors in the current administration, such as Kellyanne Conway, have nothing but contempt for any rules that cannot threaten them with prison if they don’t comply. She and the president she serves are going to do the right thing only when it suits them to do so, not if it only serves the interests of the country. Recently some Democrats in Congress have put forward a bill to amend the Hatch Act in order to redress the lack of enforcement power of the OSC when pursuing complaints against senior political appointees. If the bill passes, presidents will no longer be sole arbiters in such cases. If the bill passes and Kellyanne Conway continues violating the Hatch Act by advocating partisan political issues in her official capacity, she still won’t end up in jail, but she and her boss may have to pay some real political consequences, which is the only thing they understand . . . maybe.
— Vita