Service with a Smile

June 6, 2019 Editor
In an exchange in Decatur, Alabama, between a police employee and a handcuffed citizen, the employee identified himself as F*ck You when the citizen asked his name. The citizen and another young man had been filming a music video outside, and there are conflicting accounts about whether they used a handgun as a prop in filming. The sight of the handgun may have prompted a passerby to call police. It is unclear if that is what brought police to the scene, but if it did, then the two young men used poor judgment in filming in public with a handgun without making it abundantly clear they were engaged in a harmless fiction.
Further speculation on what brought about the police encounter devolves into victim blaming and sidetracks the basic point, which is that the behavior of Officer F*ck You was clearly out of bounds and unnecessary. It turned out the two citizens had not been up to no good and there had been no need to handcuff them and illegally search at least one of them. Officer F*ck You’s thin skinned behavior is precisely the kind of escalation of an encounter with a citizen that too often ends with the police employee meting out violent street injustice. A person as hotheaded and drunk with power as Officer F*ck You has no business dealing with the public. 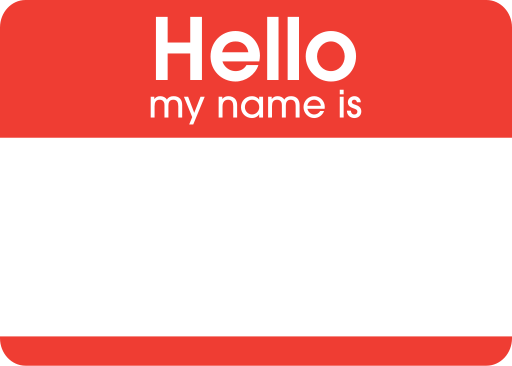 Many people dealing with the public find it helpful to wear a sticker like this one. Write in whatever name you like, but try to be nice! Image created by Eviatar Bach.
We can imagine other scenarios for the encounter in order to guess at why it went wrong, but thankfully stopped short of becoming another incident of a police employee murdering a citizen. What if the two citizens had been middle-aged white businessmen in suits and ties? Chances are higher in that case there would have been no police encounter at all, even if a passerby had spotted a handgun. Surely such fine gentlemen must have good reason for what they’re doing! Perhaps they’re police detectives filming a training video!

Had the police nonetheless been called to the scene, chances are high the police employees would have treated the two white, middle-aged men in suits with circumspection and respect while working politely toward a peaceful resolution to the problem. Had Officer F*ck You been called to the scene at all, he might have introduced himself instead as Sam-I-Am, the character in Dr. Seuss’s Green Eggs and Ham who beguiles another character into trying the titular foods. Or he could have said with a salty twist “Call me Ishmael”, as the narrator does at the beginning of Herman Melville’s Moby-Dick.

There are any number of names Officer F*ck You could have used if it is the policy of the Decatur police department for employees not to identify themselves when asked by a citizen. He could have referred to such a policy as a reason for not giving any name at all. Contrary to what many people may believe, it is not a matter of law that police employees identify themselves by name, but a matter of each police department’s policy. All of the alternative tactics mentioned above would have conveyed a less hostile tenor and might have even lowered the tension. Isn’t that what a police employee is supposed to do in order to keep the peace? What purpose does it serve when a police employee gets in a citizen’s face when that person simply asks for a name and badge number? Who does it protect to belligerently retort “F*ck You! F*ck You is my name!”?
— Ed.