May 26, 2019 Techly DoRight
This Memorial Day weekend, millions of Americans will gather for cookouts, enjoying grilled foods of all sorts, and many of those people will eat something that includes the following ingredients:

And that is by no means a comprehensive list of all the chemicals that may be found in hamburgers made from ground beef produced from factory farmed cattle and sold at grocery stores nationwide. Just about everything we eat can be made to sound pretty scary when it’s broken down like this into terms only chemists might understand.

Critics of the Impossible Burger, a substitute for hamburger that contains no meat, have been using the tactic of decrying the unpronounceable ingredients in its production as well as tacking on the argument that an Impossible Burger is no healthier than a regular burger. The Impossible Burger is necessarily highly processed in order to imitate ground beef in flavor, texture, and the many other characteristics that signify to our bodies and brains that we are eating meat. The goal is to offer meat eaters an alternative to factory farmed beef which contains residues of hormones, antibiotics, herbicides and pesticides, heavy metals, disinfectants, and which is wrought at the cost of enormous animal suffering and the dehumanization of people working the production line. 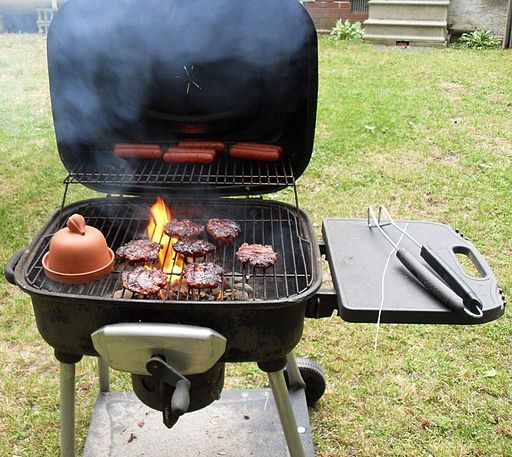 Burgers and hotdogs cooking on a charcoal barbecue grill. Photo by Luke.
The argument that the Impossible Burger is not a health food is a straw man, set up not by the makers of the product but by critics so that they can knock it down, and by extension get people to dismiss the whole crazy idea of a meat alternative. Critics intentionally ignore that Impossible Foods never claimed its burgers were a health food, and that if consumers are seeking healthy dietary options, perhaps hamburgers should not be high on their list. Vegetarian options have always been synonymous with health food, and whether that was ever entirely true was besides the point since it was the perception people had that vegetarian food was healthier food. The Impossible Burger is a vegetarian meat alternative, hence it’s supposed to be healthier than a regular hamburger, right?

The point again of producing a meat alternative that appeals to meat eaters is to wean them away from supporting the factory farming of animals, with its disastrous consequences for the animals, the environment, and ultimately for the people producing and consuming the meat. The beef industry has a powerful lobbying influence on government, and it has the means and the ability to employ mouthpieces everywhere who can disguise their links to the industry. It’s still early in the development of competition between the beef industry – and agribusiness as a whole – and producers of meat alternatives, but perhaps the meat producers see down the road to where consumer preferences shift away from them in a big way as buying satisfying meat alternatives becomes easier and cheaper.

It’s wise to read labels and to be skeptical of genetically engineered foods, keeping in mind not all of them are inherently as harmful as Roundup Ready crops, which introduce herbicide residue throughout the food supply. Making informed decisions requires at least a modicum of research rather than merely listening to the loudest voices in print, on the air, or on the internet. It’s also prudent to look ahead and not stay stuck in old ways of doing things when newer, better alternatives present themselves. Ask the makers of BlackBerry smartphones, and any of the other true believers in the status quo throughout history as changes swirled around them. This Memorial Day weekend, if you’re able to grill some tasty, ethically produced meat substitutes then that’s great, and since the holiday cookouts will most likely be hot and thirsty occasions, you may like to accompany your meal with a glass of cool, refreshing dihydrogen monoxide, otherwise known as water.
— Techly