The Most Desirable Undesirable

May 14, 2019 Isidore Gnome
It’s May and the sweet, citrusy smell of honeysuckle blossoms fills the air. For many people around the country the honeysuckle smells are emanating from invasive Asian and European species that have come to dominate the native honeysuckles in the landscape in the past century and more. The honeysuckle genus, Lonicera, encompasses more than 180 species from around the world, of which about 20 are native to North America. The primary reason any of this matters to American gardeners is how the invasive species, once a welcome addition to the landscape, will overwhelm other plants given even a little leeway.
Besides the bush honeysuckles which dominate the understory in woodlands and arch their branches into the space of neighbors in the garden, there are the twining vines of the Japanese honeysuckle (Lonicera japonica), which make their way into absolutely everything, whether along the ground or into the canopies of trees, robbing their hosts of sunlight, water, and nutrients. Once the blooms are done, red or purple berries follow, which birds love to eat, making sure the plants spread everywhere the birds go. Honeysuckle bushes and vines can also readily spread by layering, which is to say that parts of them touching soil develop roots, creating a leapfrog effect of new plants. Cut one section down to the ground, and likely as not another new plant has already started a few feet away. 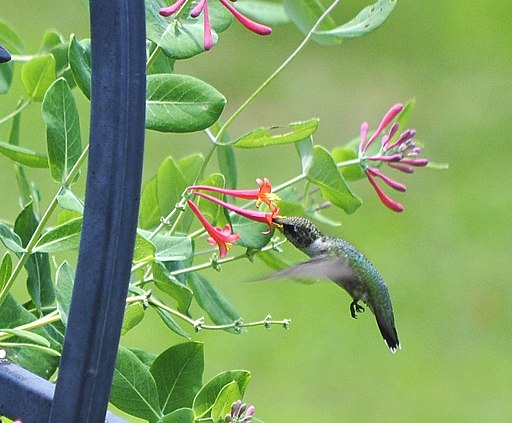 A ruby-throated hummingbird (Archilochus colubris) sips nectar from a North American trumpet honeysuckle (Lonicera sempervirens). Photo by jeffreyw.
There are a number of other aggressive plants which have less to recommend them than the honeysuckles. English ivy (Hedera helix), for instance, offers no sweet fragrance or much in the way of bird food. Misguided people encourage it to grow on buildings, when what they would be better off planting is Boston ivy (Parthenicissus tricuspidata), a better behaved climber which won’t invade the mortar on brick structures, corroding it and pulling it out. Wild grape (Vitis spp.) has only found cultivated use in contributing genetic material to vineyard varieties. No one plants wild grape itself. It is mostly found in woodlands and has no ornamental value, though of course that is in the eye of the beholder. 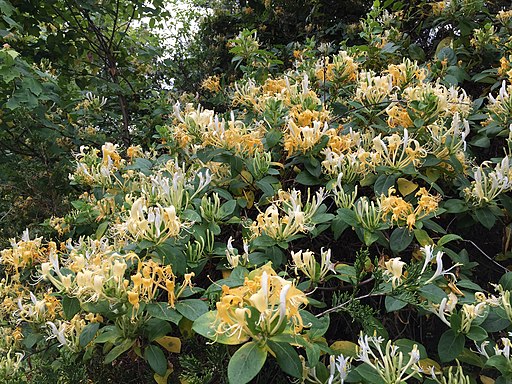 Japanese honeysuckle blooming along Franklin Farm Road in the Franklin Farm section of Oak Hill, Fairfax County, Virginia. Photo by Famartin. The blooms turn from white when they first open to yellow as they age.
Japanese honeysuckle and the bush honeysuckles are here to stay – there’s no eradicating such successful invaders who are popular with the native fauna, if not flora – and coping with them therefore becomes a state of mind as much as physical labor. Step outside in May and inhale the intoxicating scent of their flowers and observe butterflies and hummingbirds helping themselves to the nectar, and in summer take your ease in the shade or indoors while the berries form, knowing birds are noting their ripening until fall when they will descend on the plants and devour the berries, spreading new plants far and wide. It’s too hot and bothersome in summer to get after the honeysuckle with implements of destruction, but in winter when it’s cool and memories of their pleasant attributes are far away, get after those suckers and yank ’em out root and branch. Don’t worry – you’ll likely never get rid of them altogether, and come spring there will be a new birth of honeysuckle and with it a wonderfully sweet scent in the May air.
— Izzy