April 12, 2019 Vita Historia
Dan Robbins, inventor of paint by numbers kits, died recently at the age of 93. The kits Mr. Robbins invented became wildly popular for children and adults in the decades after World War II, and while sales faded in the last decades of the twentieth century, the kits never disappeared altogether. Now with the aid of the internet, paint by numbers kits have regained some popularity, and reproductions of works by famous artists such as Vincent van Gogh are available, widening the scope of painting kits available to hobbyists. 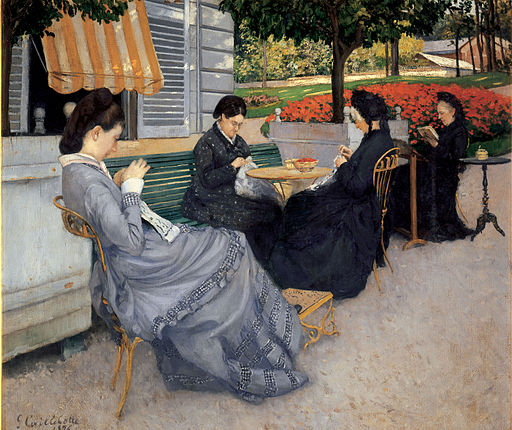 Portraits in the Countryside, an 1876 painting by Gustave Caillebotte (1848-1894), depicting the artist’s mother, aunt, cousin, and a family friend. With its large areas of uniform color and uncomplicated design, this painting would lend itself well to the paint by numbers treatment.

It hardly matters whether people consider themselves hobbyists or crafters when they pick up paint by numbers kits, or ship modeling, or knitting and crocheting, because the main thing is they are occupying themselves with a satisfying activity that often results in a useful or decorative object. The result doesn’t have to be art, nor does it have to be perfectly made. The value is as much to the maker as it is to the thing made, and possibly more. A person engaged in a hobby or craft gives himself or herself the gift of peaceful hours during which their mind and emotions can heal.

People who sneer at the dubious artistic value of a paint by numbers painting or a Bob Ross painting miss the point of those works. Hobby painters are as interested in the process as they are in the result, which often feels ancillary and even something of a let down because it means the end of the process. If they somehow produce great art, then that’s a bonus. Most of what they produce will be schmaltz, but so be it. They are helping themselves and not hurting anyone.

Take a few moments to relax as Bob Ross paints an imagined landscape and imparts his views on life.

Mr. Robbins did a great service providing at least momentary joy and well being for millions of people over the years with his paint by numbers kits, one of many hobbies and crafts contributing therapeutic benefits to those who took them up, and the gooey sentimentality of some of the subjects of those paintings hardly matters in the grander view. Losing oneself in a hobby or craft is better than watching television, or any of the numerous other electronic screens commanding everyone’s attention in today’s world.
— Vita