Look at This Idiot

April 7, 2019 Isidore Gnome
Instagram influencers are multiplying like flies, and their presence is merely annoying to most reasonable people who are not unduly affected by their activities, that is until the influencers started sitting in Joshua trees and trampling fields of California poppies. The young woman who posed for pictures while sitting in a Joshua tree often exhibits outlandish behavior to slake her thirst for attention and to cynically exploit her fans for money, and both outcomes have until now been a sideshow within the larger culture. Plants and animals don’t share any interest in Instagram idiocy, though, and when they are drawn into it and abused, then it’s up to people with common sense and a sense of decency to defend them. 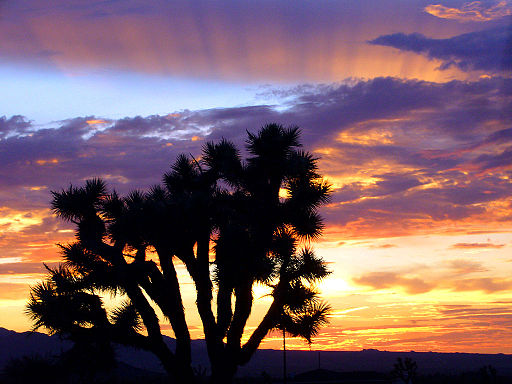 A Joshua tree silhouetted by a summer sunset in the California high desert. Photo by Jessie Eastland. This Yucca brevifolia looks quite noble in its own right, and would not be improved by the addition of some attention-seeking nitwit hanging out in its branches.
There appears to be no National Park Service rule explicitly forbidding visitors to Joshua Tree National Park from climbing on and sitting in the fragile trees. Maybe the Park Service assumed people had more sense and more decency than to do those things. Most people do; but rules, like locks, are not made for most people – they are made for the few without any sense or decency. The Park Service does have a rule requiring a permit for commercial photography, which Instagram photos of celebrities surely are, and if the Joshua tree sitter did bother to get a permit, the Park Service must have asked her plans, or should have. If Park Service employees granted her permission anyway, then the rules need to change, even if Joshua trees are not yet on the Endangered Species List.
The fields of wildflowers currently blooming in California are largely under the jurisdiction of California’s park system. California State Parks have rules protecting the wildflowers from being trampled by the thousands of visitors that come to see them. The main rule Instagram influencers appear to violate states that visitors should stay on the trails and not traipse off into the fields. One person going off a trail may not cause much damage, but thousands and tens of thousands doing it causes damage that can take years for nature to repair, if it ever does. Like the National Park Service, California State Parks also have a rule requiring a permit for commercial photography. The Instagram influencers and their photography crews are probably violating rules both by straying off the trails and by not getting a permit, because again, if they sought a permit they might have to be honest about their plans.

As the recent government shutdown demonstrated, the nation’s parks are staffed lightly – a Thin Gray and Green Line, if you will – and it doesn’t take much reduction in staffing to incur a breakdown in order and civility caused by a destructive minority of visitors who sneer at the idea of conservation and whose idea of enjoying nature involves only callous, swaggering domination over it. Park employees, whether at National or State Parks, have always had their hands full keeping that crowd under control so that they don’t destroy the environment along with the peaceful enjoyment of it by other visitors. Now they also have to cope with Instagram influencers, swooping in like flies, and following after them the swarms they have influenced, all bent on twisting nature to their own perverse, fairy tale vision of it. These are the self-absorbed people accidentally plunging to their deaths off cliffs in the Grand Canyon and in Yosemite while foolishly trying to take unsafe selfies.

Presumably no poppies were harmed in overlaying Pink Floyd’s “The Great Gig in the Sky”, from their 1973 album The Dark Side of the Moon, on this scene from the 1939 film The Wizard of Oz. The original editions of both survive intact and can be enjoyed by themselves. It is possible to create without trampling and destroying in a pathetic attempt to call attention to oneself.

If people want to behave foolishly and others want to watch them do it, that’s their own business. Most of it is relatively harmless, even when influencers have taken to extorting hotel and restaurant owners for free lodging and food and drinks. They’re not doing anything journalists haven’t always done. It’s just that since it is easier to declare oneself an Instagram or YouTube influencer than it is to gain employment with an organization churning out reputable journalism, there are now hordes of them, descending like ravenous flies on resorts worldwide. Even the shallow influencer whose parents bought her way into a university she was supremely unqualified to enter, even she is harmless in most ways other than as any kind of role model, because in addition to her other selfish behavior, she has displayed a dearth of moral character by throwing her parents under the bus soon after the scandal made news. It is when these influencers trespass on nature that reasonable people have to object and draw a line, warning them they have gone too far and disturbed what really matters in the world. As for that fickle portion of the public, the easily influenced, they might consider how altering the title of this post applies to them, as in “Look at this, Idiot!”
— Izzy