April 2, 2019 Techly DoRight
Most of the publicity regarding cameras hidden in the rooms of paying guests has centered on Airbnb, but conventional hotels have also engaged in spying, as in a recent scandal in South Korea where some hotel staff peddled captured video footage of guests online as pornography. With cameras getting smaller while retaining good lens quality, and storage capacity on digital solid state chips growing larger, for ordinary people the temptation to spy has never been greater. No longer does someone need thousands of dollars and considerable technical knowledge to set up and conceal a surveillance camera or two or three.
Airbnb claims it does not allow cameras, hidden or otherwise, in bathrooms and bedrooms, and that it requires hosts to disclose to guests the locations of any cameras in the more public spaces of rental properties. They allow cameras in spaces such as living rooms and kitchens in the interest of monitoring and protecting the hosts’ property. Airbnb says it’s all there in the rental agreement a guest signs. Hotels have always operated without surveillance cameras officially and knowingly installed in guest rooms. Following the reasoning from Airbnb, their situation is different because the rentals are in privately owned dwellings, where damage and abuse caused by guests can more seriously impact business for each host, who can’t spread out losses over the income from a hundred room hotel. 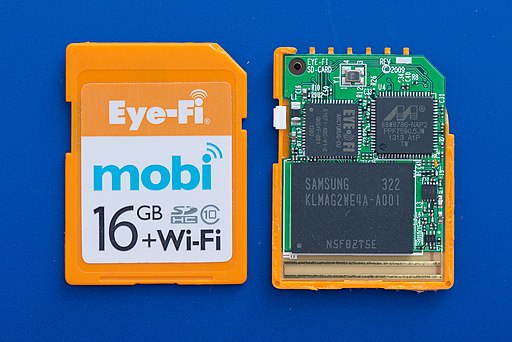 16 GB (GigaBytes) of data storage and wi-fi capability, packed onto a card the size of a person’s thumbnail. There are now cards with 512 GB capacity, which can store several day’s worth of high definition video. Photo by Hegro Berlin.
That’s a good economic point, but not a good moral one. No spying on people in a domestic situation is acceptable. When people are out in actual public spaces, as opposed to the relatively public spaces of a domestic living room, kitchen, or hotel room, they should nonetheless be entitled to complete privacy. Having guests waive their right to privacy by signing off on yet another head spinning legal disclosure, like the multitude of such documents they encounter now, is not acceptable. The choice then becomes either accept spying or do not rent rooms from Airbnb. That could be acceptable as long as Airbnb hosts explicitly and clearly disclose the locations of every camera and show to the guest what the camera is seeing in real time. After the guest’s stay concludes and the host has had the opportunity to assess the property for damages, arrangements can be made between the guest, the host, and Airbnb to destroy the video footage to the satisfaction of all.

Airbnb has undertaken a new business model filling a niche and has apparently been successful with it, but if it cannot ensure guest privacy while also preserving the integrity of host property, the company will see a loss of public trust, and with it a loss of revenue. The latest news stories about spying hosts can’t be good for business. Left unattended, the problem for Airbnb will only get worse.

In the 1960 film Psycho, directed by Alfred Hitchcock, Anthony Perkins as Norman Bates, owner of the Bates Motel, spies the old-fashioned, low tech way on guest Marion Crane, played by Janet Leigh. If by peeping at his guest, Marion, with the same supposed motivation as some Airbnb hosts, Norman was trying to catch her stealing, he was far too late for that. It did not end well for Marion Crane, Norman Bates, or the Bates Motel.

Technological improvements will continue to make cameras smaller and more capable of capturing high quality images in low light; digital storage capacity will continue to increase and be put on ever smaller devices, along with the increasing capacity of wi-fi networks to handle the flow of information; batteries will get smaller and more powerful, allowing tiny cameras to operate without wires, which will make them even easier to hide. All these technological improvements, as always, are amoral in themselves. The question becomes, for people who desire extra income by renting out rooms in their homes, as for all of us, does what technology makes possible mean that we have to use it, even if the technology trespasses on moral boundaries? Just because you can do something, does that mean you should do it?
— Techly