Those Were the Days

March 5, 2019 Vita Historia
In 1947, as Jews leaving Europe were working toward establishing their independent state of Israel in Palestine, an anti-communist scare was gaining momentum in the United States, leading President Harry Truman to sign an executive order requiring loyalty oaths from federal workers suspected of communist sympathies and possibly conflicted allegiance. Over 70 years later, the state of Israel is well established with economic and military help from the United States, and the idea of a loyalty oath as an assurance that a government employee owes allegiance to America only, and not to any foreign power, has been turned on its head by state and federal laws assuring loyalty to Israel as well, or at least not to engage in criticism of that nation’s increasingly aggressive policies toward Palestinians within and without its disputed borders. 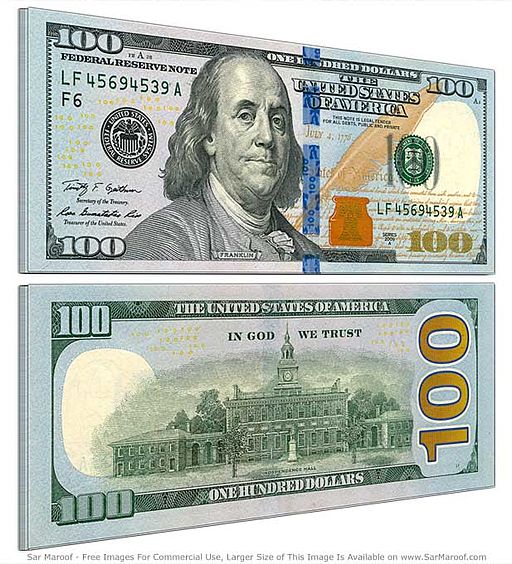 2015 release of the 100 dollar bill, showing the design measures taken to foil counterfeiting. The portrait of Benjamin Franklin remains. Presentation by Sar Maroof.
These laws, which require a state employee or government contractor to sign a pledge not to engage in Boycott, Divest, and Sanction (BDS) actions against Israel, are so blatantly unconstitutional that it beggars belief they have not been challenged and struck down in the courts already. They are a return to the old days of anti-communist loyalty oaths, but with a bizarre twist. And it’s that twist which complicates matters, because any criticism of the pledges or of Israel bypasses reason and plain reading of the Constitution and goes straight to emotional howls of anti-Semitism. Most people know that’s coming, and since they don’t want to withstand it, they don’t speak up in the first place. The lobbyists for Israel then have their own way.
What has also complicated the relationship between the United States and Israel since the late 1940s is how support for Israel has taken on a polyglot nature in the intervening years, particularly with the rise of white evangelical Christians in American politics since the 1980s. In the 1940s, American support for Israel came largely from American Jews and from the large numbers of people who sympathized with the plight of European Jews after the tragedy of the Holocaust. There are other reasons having to do with the labyrinth of Middle Eastern politics and, of course, oil, but those are beyond the scope of this post.

Since the 1980s, as support for Israel’s increasingly hard line toward Palestinians and relations with its Arab neighbors dwindled among some American Jews, the slack was taken up by white evangelical Christians who looked at the modern state of Israel and saw the fulfillment of Biblical prophecy. They cared little about the multitude of practical complications, and they had an interested ear in the White House with Ronald Reagan. By the 1990s, a litmus test for election to political office in some parts of the country was support for Israel, right or wrong, and the test was administered not by American Jews, but by white evangelical Christians and, increasingly, by lobbying groups supported by the right wing in Israeli politics.

Lobbying in Congress by foreign powers is supposedly regulated by law, though in practice it goes on mostly unimpeded. In the 1980s, when Boycott, Divestment, and Sanctions against South Africa’s apartheid regime gained steam in this country and around the world, the South African government did not have anywhere near the lobbying clout in American politics of the Israeli lobby then, and certainly not as powerful as it has become since. South Africa did not have millions of Christian soldiers in this country who were willing to go onward for it no matter what. About all South Africa had were diamonds, and it turned out they were not enough to resist pressure from the rest of the world to reform its immoral system.

A scene early in the 1960 film Exodus, directed by Otto Preminger, with Sal Mineo and Jill Haworth arguing their different world views in 1947 aboard a refugee ship from Europe bound for Palestine. Paul Newman looks on. Indeed, those were the days.

Now times have changed for Israel, and it’s no longer the plucky underdog deserving sympathy; its policies of the last 40 to 50 years have tainted that image, turning it into a kind of South African apartheid regime, and if people in this country want to criticize it for that, or for anything else, then it’s none of this government’s business, no matter how many “Benjamins” change hands in the halls of Congress, or how many white evangelical Christians with fever dreams of a picturesque Holy Land as they imagine it from their family Bibles, a place for fulfillment of the Gospel that they probably suppose would be nicer if it weren’t inhabited by all those dusky modern Jews, no matter how many of those people angrily pull away their support from any politician who dares criticize Israel, and with it their fantasy.
— Vita