March 1, 2019 Isidore Gnome
In most of the country, daffodils (genus Narcissus) bloom in March and are among the first signs of spring. Some places might have blooms as early as February, and others not until April. In all places, the leaves pop up from the ground while freezing weather is still frequent, and inexperienced gardeners and curious onlookers worry that the plants have come up too early and will suffer damage from the cold. Not to worry. The daffodils have been through it all before and will be fine. Any damage they do incur from late winter weather usually comes from being bent down to the ground or snapped by the weight of a late snow or ice storm.
Deer, rabbits, and squirrels do not eat daffodil bulbs, foliage, or flowers since they are toxic. The plants spread by jumping from place to place by seed dispersal as well as increasing into clumps formed by daughter bulbs dividing from their parent bulbs, rather like offspring who have matured and set up housekeeping next door. Not all daffodils are noticeably fragrant, and as often happens with flowers it is the older, original varieties that are most fragrant, because plant hybridizers sometimes lose that aspect in pursuit of other traits such as size or color. Trade-offs. 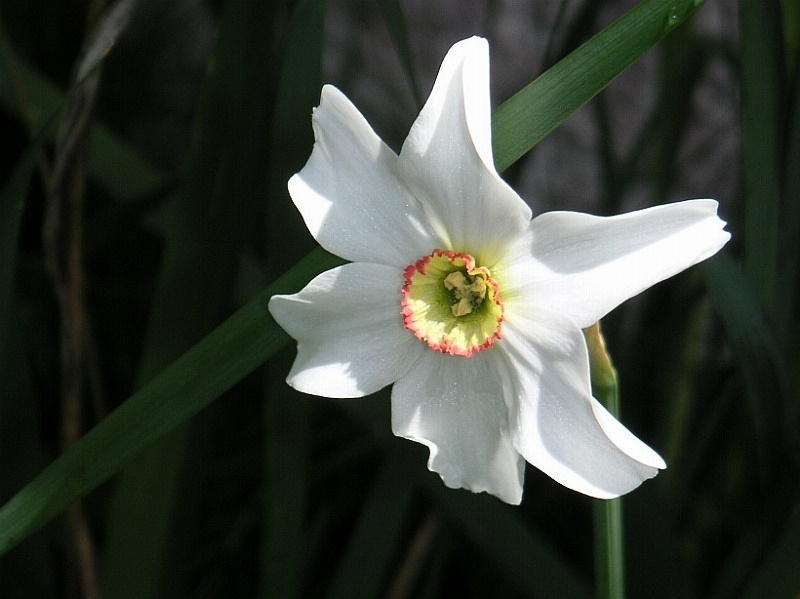 Narcissus poeticus. Photo by Jean-Jacques MILAN.
Despite a substantial list of pests, fungi, and viruses that can adversely affect daffodils, in practice they should not gravely concern the gardener since the daffodils seem to cope well on their own. The worst condition affecting daffodils, particularly their bulbs, comes from poor drainage or excessive water, particularly in winter. Hardly anyone likes cold, wet feet, and daffodils are no exception. On account of the wet winter in most of the eastern half of the United States, daffodil displays may be subdued this March.

In the 1965 film Doctor Zhivago, a long winter finally turns to spring, heralded by a field of daffodils.

About the only thing an American gardener can say against daffodils is that they are not native to North America or to any part of the Western Hemisphere. Daffodils originate from southern Europe and northern Africa. That daffodils are not native here is an academic complaint, however, since the genie can hardly be stuffed back in the bottle at this point. Most of the people living now in the Western Hemisphere do not belong here, either, and it’s possible to argue they have done far more damage to the native habitat than anything innocent daffodils could have done. On the contrary, daffodils perform a great service everywhere because their trouble free disposition, loosening of hard soils, and cheerful announcement of spring give a greater portion to the gardener and non-gardener alike than they require in return.
— Izzy