Recently the Virginia House of Delegates refused to vote on ratification of the Equal Rights Amendment (ERA), defeating it perhaps for good. If Virginia had voted in favor of the Amendment, that would have been the 38th and deciding vote among the states, and then the measure would have returned to the United States Congress for reconsideration of whether the time limit for ratification should be extended. 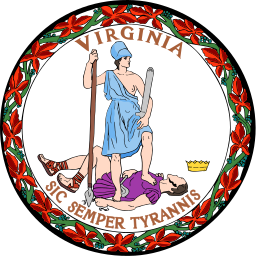 The State Seal of Virginia. On February 21, on the grounds of the state capitol in Richmond, Virginia, two pro-ERA activists posed as the figures depicted in the seal, and one was arrested.
The Equal Rights Amendment is meant to constitutionally protect women’s rights and should be a common sense addition to the country’s legal framework, but anti-abortion activists and those who cling to traditional gender roles have long suspected the amendment would be used as grounds for protecting abortion rights of pregnant women besides guaranteeing women’s rights when they are at odds with men’s long standing privileges, and consequently they have done everything in their power, high and low, to defeat the amendment.
Meanwhile, in an official ceremony for a high school in Wisconsin, female cheerleaders were given “joke” awards for their physical attributes, such as largest breasts or butt, or skinniest body. When some parents and faculty objected to singling out emotionally immature girls this way, the cheerleaders’ coach, Patti Uttech, expressed dismay that “politically correct” people couldn’t understand how the awards were all in good fun. Last year another Wisconsin high school made national news after people became aware that a photographer posing a group of boys for a prom picture had encouraged them to raise their arms in what can only be viewed as a Nazi salute, and almost all the boys appeared to comply with enthusiasm.

Then there’s Goodloe Sutton, 80-year-old owner and editor of The Democrat-Reporter, a weekly newspaper in Linden, Alabama, who in a February 14 editorial railed against Democrats he supposed were plotting to raise taxes in Alabama, and called for the Ku Klux Klan to raid the homes of Democratic legislators in Washington, D.C.. He added even more hateful remarks when asked later for elaboration by other journalists from Alabama and elsewhere once his editorial became notorious. In 2019, Mr. Sutton’s beliefs and attitudes are more in tune with those from the year of his birth, 1939.

Paul Simon and Art Garfunkel perform “Slip Slidin’ Away” in the September 1981 Concert in Central Park in New York City.

Did those beliefs and attitudes ever go away in the intervening years? Perhaps partially, although mainly they went underground. Now with encouragement from the current resident of the Oval Office, ignorant and hateful talk is bubbling back to the surface across the land, and here and there action has followed. In the current environment, it will only get worse. The Ku Klux Klan of 1939 is resurrected by a bitter old man with a newspaper in Alabama. The Nazi Party of 1930s and 40s Germany is evoked by laughing schoolboys in Wisconsin. Again in Wisconsin, a high school cheerleaders’ coach hands out awards that would not have been out of place in 1950s America, though even then most people might have deemed them in questionable taste given the age of the recipients. And in Virginia an amendment to the United States Constitution goes down in flames because even in 2019 there are people – not all of them men – who cannot step away from controlling all women as if it were their right.
— Vita