The Ear of the Beholder

February 15, 2019 Isidore Gnome
There are two phenomena related to hearing that have opposite reactions from listeners and that often originate from food ingestion noises, one called misophonia and the other ASMR (Autonomous Sensory Meridian Response). People with misophonia react angrily to certain sounds, and the peculiar thing is that people who are sensitive to ASMR can react with pleasure to the very same stimulus. In both cases, food noises are often the trigger, even though other noises, such as tapping, can serve as well.
Misophonia sufferers must cope with their condition using psychology and physical methods like earplugs or headphones with music. People who have tapped into how good ASMR can make them feel are watching YouTube videos, listening to audio tapes, and downloading applications to their phones which promise to give them the pleasant sensations they seek. In the case of the YouTube videos, there are ASMR performers who are making five or six figure incomes uploading content featuring themselves leisurely and noisily eating various items like raw honeycomb or ramen noodle soup. 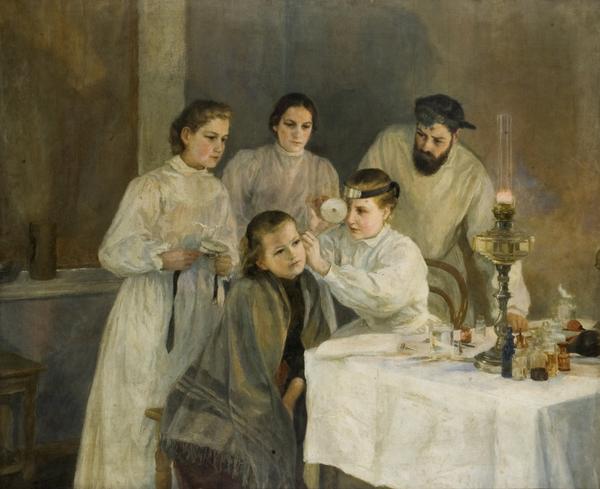 Scene in a Russian Hospital: The Ear Inspection, an 1890s painting by Emily Shanks (1857-1936). The sources of misophonia and ASMR, while related to hearing, are most likely found in the brain, not in an overly sensitive ear.
There is no cure for misophonia, and for ASMR apparently no cure is necessary since it is relatively harmless. Some ASMR videos can make the activity seem more perverse and fetishistic than is probably healthy, but otherwise they usually fall under the category of “to each his own”. Since neither condition appears to be related to any hearing disorder, they both must be entirely psychological. No one knows precisely what adaptive purpose they might serve, although of the two it seems ASMR would be more useful because it encourages people’s understanding of what is good to eat. It would seem that people with misophonia are turned off from eating what others are eating because they are annoyed or even enraged by listening to them, regardless of how much the eaters appear to be enjoying their meal.

These two conditions appear to be opposite extremes on a spectrum, separated by a wide area of appreciation or disgust for food ingestion noises, none of which trigger significant emotional responses. Beauty is in the eye of the beholder, of course, but it is interesting that visuals of extremes comparable to the auditory extremes in question here don’t appear to provoke as visceral a response. All the senses have particular areas of the brain devoted to them, and in the case of the older primary senses, it appears they bypass the evolutionary later overlay of reason and speak directly to core feelings.

A clip from an October 2012 episode of the animated TV show Family Guy, created by Seth MacFarlane, who was also the voice actor for the Peter Griffin character.

Such is the case with the sense of smell, which evokes memories to which we then struggle to add words. It could be that with hearing we understand at a distance what we need to either welcome or dread, and for a minority of people that understanding has gone off kilter for ill or good. For everybody else, besides the usual annoying food noises of too loud chewing or slurping, there is the screech of fingernails on a chalkboard or the squeak of styrofoam, and it’s baffling what may be the adaptive purpose of shuddering at those noises even though the actions creating them do not necessarily threaten us, but nearly everyone can attest how those noises pierce them to their core. We know only how unpleasant it is to hear them, and we are at a loss to express why.
— Izzy