February 12, 2019 Techly DoRight
The Department of Energy is proposing to change a rule implemented late in the Obama administration that mandated energy guidelines for light bulbs which would have effectively removed all but Light Emitting Diode (LED) bulbs and Compact Fluorescent (CFL) bulbs from the market in January 2020. Since manufacturers are phasing out CFLs, LEDs would have the market to themselves shortly. Even though manufacturers are turning out more LEDs to replace incandescent bulbs, making the old style bulbs less significant in the market with each passing year, they still apparently chafe at the rule and are behind the push to get it changed.
There’s no question LEDs save energy over incandescent bulbs, which waste a lot of energy producing heat instead of light. LEDs also last far longer than incandescents. While the retail price for LEDs had been around ten times higher than the price of incandescents, the price has fallen significantly in the past few years as LEDs flood the market. Unlike the light given off by CFLs, the quality of the light given off by LEDs is every bit as good as that from incandescents, and because there are many options for changing the light from LEDs they are better overall. If Americans are serious about saving energy, it’s difficult to imagine a good reason for not switching over to LEDs sooner rather than later. 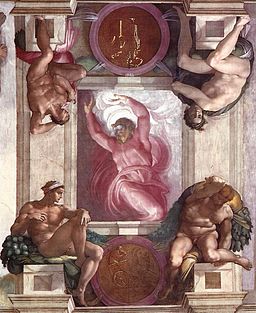 Separation of Light from Darkness, a 1512 fresco by Michelangelo (1475-1564), painted on the ceiling of the Sistine Chapel in Vatican City. The Vatican recently completed an eight year project to install LED bulbs and fixtures throughout its facilities, including the Sistine Chapel, cutting their energy use for lighting by 90 percent.
Energy savings from the indoor market for LED bulbs probably will pan out as scientists predict since people will use about as much lighting as they’ve used before, only they will have switched out the type of bulbs they use. Municipal outdoor lighting, on the other hand, has not proved to save energy when switching to LEDs because officials tend to have more of the new lights installed, negating energy savings as well as increasing light pollution. There are compelling reasons for municipalities to increase outdoor lighting, such as fighting crime, but still it seems a terrible waste of resources that may have more to do with bureaucrats defending their turf from budget cuts which might ensue after energy savings. Luckily, private citizens don’t usually control their own budgets in a similarly wasteful manner.
About outdoor lighting at home, it should be noted that scientists don’t know exactly what type of light is most attractive to insects, or to what extent the heat given off by bulbs is a factor. Some types of light are more attractive than others to some kinds of insects and not to others, and most insects are drawn to heat, but not all of them. There is no truth to the rumor that all LEDs, even bright whites, are not attractive to insects. To avoid drawing insects, the best kind of bulb is still an orange one, usually marketed specifically as a “bug light”, though of course it would more accurately be described as a “no bug light” or a “fewer bugs light”. The LED will be more effective than the incandescent because it also takes much of the attractive heat out of the equation. The absolute worst kind of outdoor lighting to get is marketed as a “bug zapper”, for a number of reasons. There are now bug zappers available which use LEDs as their light source, and that makes the least sense of all, except perhaps to someone who with unwarranted satisfaction feels better about saving energy while unnecessarily luring to their deaths any and all bugs.
— Techly