It Wasn’t Funny Even Then

February 5, 2019 Editor
“So thou, O son of man, I have set thee a watchman unto the house of Israel; therefore thou shalt hear the word at my mouth, and warn them from me.”
— Ezekiel 33:7, from the King James Version of the Bible.

Amid all the furiously backpedaling confusion promulgated by Virginia Governor Ralph Northam over whether he was in the 1984 Eastern Virginia Medical School yearbook picture of two male party goers, one in blackface and the other in a Ku Klux Klan (KKK) outfit, there appears to be no acknowledgment from the governor or his staff of why they seem to think blackface is less racist than wearing KKK garb. They appear to assume that it is racism lite, and therefore perhaps excusable, choosing to ignore that even in 1984 such behavior was not acceptable in general society, and certainly not seen as good clean fun. The governor professes confusion over whether he was one of the two men in the photo, but nowhere does he allow the possibility he could have been the one in the KKK outfit. He claims he was either the one in blackface or he was not in the picture at all.

This song and dance is understandable given the feelings of the greater society about the KKK. Apparently Northam feels if he needs to equivocate about his participation in racist costuming, he is safer with blackface than with the utterly out of the fold KKK. But why? Besides the ludicrous assertion that he somehow doesn’t remember participating in the activity depicted in the photo, why does he hide behind blackface as the lesser of two evils? Is ridiculing, mocking, and denigrating black people any less evil than intimidating and threatening them? They are two sides of the same coin. And no, taking the good ol’ frat boy defense that he personally meant no harm doesn’t fly. 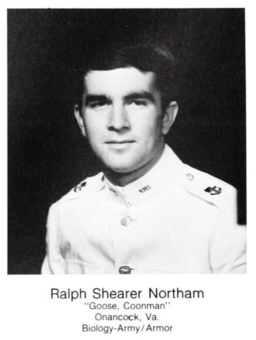 Ralph Northam’s 1981 VMI yearbook photo showing his nicknames “Goose” and “Coonman”.
Lost in the national coverage of Northam’s foolish, insensitive, and casually hateful youthful behavior is reporting about his less foolish, equally insensitive, and more consciously hateful behavior regarding the Dominion Energy natural gas Atlantic Coast Pipeline. As always with things like pipelines, the planned route took it through less populous countryside, avoiding the estates of rich folks, of which there are many in Virginia’s horse country surrounding Charlottesville in central Virginia. Instead the route is planned to take it well south of Charlottesville and Albemarle County, through far poorer and far blacker Buckingham County, with a compressor station near Union Hill, a community noted historically for its population of freed black slaves. 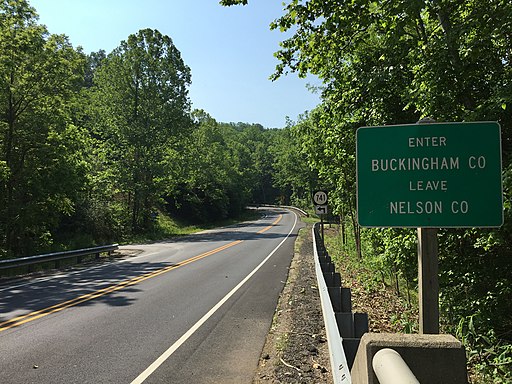 View east along Virginia State Route 56 (South James River Road) just after crossing the Wingina Bridge over the James River from Wingina in Nelson County, Virginia, into rural Buckingham County. Photo by Famartin. The Atlantic Coast Pipeline would roughly parallel Route 56, intersecting several miles down the road at Union Hill for the compressor station.
Late last year, Governor Northam dismissed two members of the Air Pollution Control Board who disagreed about the pipeline route and placement of the compressor station, thereby assuring a yea vote from the Board. In Virginia, it should be noted, the biggest utility player, Dominion Energy, is also the largest single donor from the energy sector to political campaigns, regardless of party affiliation. Dominion Energy is pushing the pipeline through Buckingham County and its compressor station in Union Hill. Just north of Buckingham County is Albemarle County and its plethora of country estates owned by wealthy white people. South of Buckingham County would apparently be too far out of the way, making the pipeline more expensive.
In lightly populated Buckingham County, Dominion Energy could expect easily overpowered opposition to its pipeline and compressor station from poor, mostly black communities. The only remaining obstacle was two obstinate members of the state Air Pollution Control Board, and with the help of their man in the Governor’s office, they were removed. Like the 1984 yearbook photo, Governor Northam and his friends thought they could dismiss the racism implicit in it all by taking the position that he didn’t mean it that way. How insulting! It matters not at all how these people intend their actions, as if that somehow magically exonerates them, but how their actions ultimately affect the people on the receiving end, and professed ignorance of the effects on those on the receiving end is no excuse, any more than it was for the German people when their leaders packed Jews into cattle cars and sent them to concentration camps.
— Ed.