Leave It to Google

February 1, 2019 Techly DoRight
People go out of their way to use the Linux operating system on their desktop and laptop computers for all sorts of reasons, and it’s a fair guess that among them is the desire to stay clear of the tentacles of major technology companies like Microsoft, Apple, and Google. Microsoft has never made any pretense of being anything but evil, while Apple has pretended to be above the fray, and perhaps the least trustworthy of the three is Google, which tipped everyone off to their evil intentions by sanctimoniously proclaiming at one time “Don’t be evil”. Any individual or organization professing to abide by moral certainties that should not even be in question is not to be trusted.
It’s ironic then that because of some holes in Linux development such as lack of drivers for some peripherals, usually printers, Linux users may find themselves forced to rely on Google services as workarounds. In the case of printers, incompatibility with Linux has become less of a problem over the past 20 years as Linux has climbed in market share to around five percent. Microsoft’s Windows is around 75 percent, with Apple’s Mac operating system at about 15 percent, although it seems no one can agree on the exact numbers. Google’s Chrome operating system makes up most of the remaining percentage in use for desktops and laptops, and because it has access to all Google services built in, including Google Cloud Print, printing from Chrome OS is never a problem even if proprietary drivers are not available from the printer manufacturer. 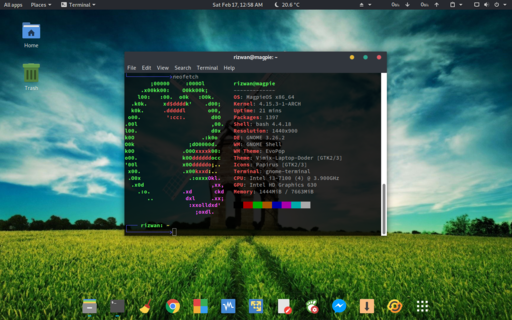 Magpie OS is an Arch-based Linux distribution, developed by Rukunuzzaman, a Bangladeshi developer. Screenshot by Kabirnayeem.99. There are hundreds, perhaps thousands, of different Linux distributions, enough to suit anyone’s preference.
Some printer makers still do not provide drivers for Linux, and in cases where generic drivers won’t work the Linux user is confronted with either turning their incompatible printer into a doorstop or falling back on workarounds like using Google Cloud Print. It’s an efficient service that comes in handy. It’s also free. Free often comes at a price, however, and in the case of Google, like many other technology companies, that means turning the user of the free service into a product sold to marketers. Google is perhaps no worse in this respect than companies like Facebook, only more pervasive by its utter ubiquity. It’s nearly impossible to escape Google entirely and still get along in today’s technological world. Google’s Chrome OS may bring up the rear among major desktop and laptop operating systems, but its Android OS for smartphones leads the next highest competitor, Apple’s iOS, by a huge margin at around 85 percent to 15 percent.

Printer manufacturers appear interested mostly in configuring their drivers for the two biggest desktop and laptop operating systems, Windows and Mac, and Linux is generally an afterthought. Chrome can fend for itself, and to some extent Linux can as well, but not without having to resort to using Google services occasionally. Linux developers are volunteers, and they can’t keep up with the myriad of proprietary configurations for all the printer models hitting the market each year. Much of the proprietary nature of printer drivers has nothing to do with actually making the product perform its basic functions, but rather with marketing gimmicks like greeting card suites.

Al Pacino in The Godfather: Part III, a 1990 film directed by Francis Ford Coppola. Not that large technology companies are necessarily comparable to the Mafia, but to some people their grasp may feel similarly inescapable.

Now more than ever people need a reliable printer at home. About the only way left of obtaining tax forms is to download them from the internet and print them at home. Using the internet and printing out web pages has become a major factor in children’s schoolwork, and their parents need to print out receipts and coupons or run a home office. Getting along without a printer, or having to jump through hoops in order to get one to work properly, can no longer be part of how most people cope with the modern world. For most people, the 90 percent who use either Windows or Mac computers, compatibility problems are rare to nonexistent; for the 10 percent minority, and particularly those who wish to go against the flow with Linux, incompatibility between operating system and printer should no longer be an issue if manufacturers want to sell their wares to all consumers and ensure the same ease of use long enjoyed by the majority. It’s about time for proprietary drivers to go into the desktop trash can.
— Techly