As the Twig Is Bent

On Sunday evening, January 20, at the end of the weekend that started with the fracas in Washington, D.C., on Friday, January 18 involving members of the Indigenous Peoples March, Covington Catholic High School participants in the March for Life, and the Black Hebrew Israelites, tens of thousands of mostly white people got worked up cheering on the Chiefs in their American Football Conference (AFC) championship game against the New England Patriots at Arrowhead Stadium in Kansas City, Missouri, by enthusiastically doing numerous tomahawk chops in unison to some sort of ersatz Native American war dance chant while encouraged by the stadium public address system. While the timing of Sunday’s so-called festivities coincidentally marked the two year anniversary of the Racist-in-Chief’s inauguration, Friday’s incident in the nation’s capital more properly marked the tone he has set the past two years. 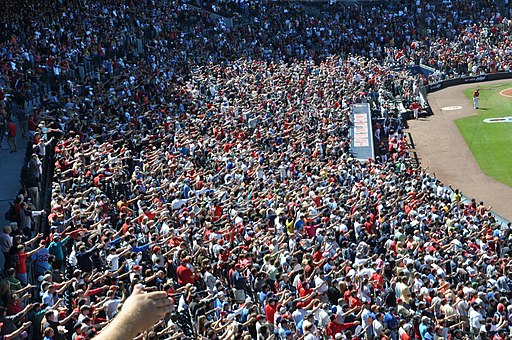 Fans of the Atlanta Braves doing the tomahawk chop on October 3, 2010, during the last game of the baseball season. Photo by Kyle James.
The history of mostly white sports’ fans enthusiasm for tomahawk chopping goes back to the late 1980s and early 1990s, when the success of teams such as the Atlanta Braves in major league baseball and the Florida State Seminoles in college football brought it to the attention of the rest of the nation. Native Americans objected, as they have to the more egregiously stereotyped names of sports teams like the Washington Redskins, but no one paid them much heed, not even Ted Turner, the ostensibly liberal owner of the Braves, nor his wife at the time, actress Jane Fonda, who has often professed her liberal views. When it comes to disrespect for Native Americans, there are apparently few differences among other Americans of whatever political stripe, ethnic origin, or religious affiliation.
Rod Serling’s introduction to “He’s Alive”, a 1963 episode of The Twilight Zone television series, starring Dennis Hopper.
Naturally the boys from Covington Catholic were not born with mockery and dismissal of Native Americans ingrained in their systems. They had to be instructed, as Oscar Hammerstein II wrote in the lyrics to “You’ve Got to Be Carefully Taught”, a denunciation of racism in a song from South Pacific, the 1949 musical Hammerstein wrote with Richard Rodgers. Even if their parents didn’t teach them directly, it would be difficult for them to not pick it up from the larger culture of privileged white people, among them those who have the wherewithal to buy tickets to an AFC championship game. The larger culture of privileged white people then came to the boys’ defense, among them large media companies that went to work smearing Nathan Phillips, the Native American elder most prominently involved in the Washington fracas, and the public relations firm with connections to Senate Majority Leader Mitch McConnell (R-KY) that was hired by the family of Nick Sandmann, the teen wearing the MAGA hat who stood smugly smirking at Phillips, to spin media coverage in his favor.
The end of the “He’s Alive” episode.
How would it be if the tables were turned and the Washington Redskins became the Rednecks and the Kansas City Chiefs became the Crackers? There are slurs for other ethnic groups that the teams could use, all of which are highly objectionable and would of course never be used. How about instead of pantomiming a tomahawk chop, the mostly white sports fans attending games started imitating a police baton swing? Perhaps in order to add insult onto injury and further enhance their reputation for insensitivity, the fans could do it during the playing of the National Anthem while black players are kneeling in protest of police brutality and racial injustice. No doubt some white people would enjoy the activity and feel entirely justified in doing it because of the satisfaction it would grant their perversely self-pitying sense of grievance, as evidenced by the white supremacist phrase “It’s OK to be white”. Like “Make America Great Again”, it is at first glance a defensible phrase, but examine it more closely and it becomes clear it is a code hiding a host of indefensible horrors.
— Vita