A Little Knowledge Is a Dangerous Thing

The problem with cable news junkies is that they believe themselves with utmost confidence to be well informed, when really they are not. Their misplaced confidence in their knowledge of current events that matter is an example of the Dunning-Kruger effect. Since these people sit before their televisions for hours each day absorbing cable television news programs, they assume they are better informed than the average citizen, a situation which they will cite smugly and insufferably to everyone in their personal orbit.

They are wrong. Cable news may give them a broad grasp of current events that is broad, but it is an inch deep. Alternately, they may have a deep grasp of stories such as the Brett Kavanaugh confirmation hearings, but in the usually superficial ways that cable news promotes the story as a kind of tawdry reality TV drama, rather than an examination of hard issues. Cable television networks long ago blurred the line between entertainment and news, probably beginning with around the clock live coverage of the 1990 Gulf War by the Cable News Network (CNN), coverage that was steered by the American government as much as possible and resulted in a narrative arc showcasing video footage of superior American battlefield technology fed to CNN by the American military. 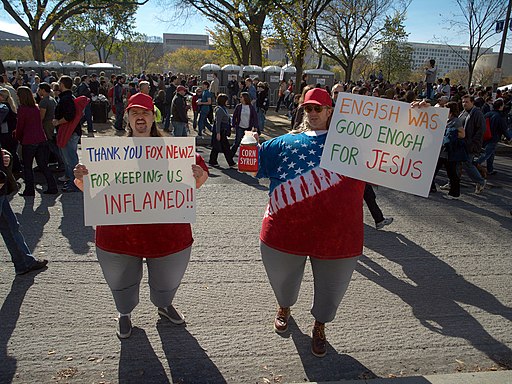 Two men attending the October 2010 Rally to Restore Sanity and/or Fear at the National Mall in Washington, D.C., make satirical comments about Fox News and its viewers. Photo by David Shankbone.
13 years later other cable news outlets, and corporate media generally, followed the 1990 Gulf War CNN formula in coverage of the 2003 invasion of Iraq, this time accompanied by some unashamed cheering from major media figures such as Dan Rather at the Columbia Broadcasting System (CBS). When the cable news companies, which unlike CBS need to fill 24 hours with supposedly newsworthy content, weren’t breathlessly following America’s overseas military adventurism, they were jumping in with both feet into the latest scandal, controversial congressional hearing, or human interest story of dubious news value such as the 2009 balloon boy hoax.

What the cable news junkies who sit rapt before their televisions as all this unfolds fail to account for are the corporate puppet masters behind the scenes of the major media companies. In this accounting, it is the questions that are not asked that matter, and the stories that are not pursued by reporters who have either absorbed the parent corporation’s views or are reined in by editors who have. They are not getting the whole story, maybe not even half of it. In the interest of selling their viewers to advertisers, the corporate media steers clear of uncomfortable territory, now more than ever over the past 30 years.

A scene from the 1988 film A Fish Called Wanda, with Jamie Lee Curtis and Kevin Kline. Warning: foul language.

Now a loyal viewer of Fox News or of MSNBC, to name the two most popular cable news providers from ostensibly opposite ends of the political spectrum, can go through an entire day of watching without having his or her world view and opinions seriously challenged. Yes, there are real differences in coverage and bias between the two networks. In the broader picture that includes smaller independent news organizations like Democracy Now!, however, the differences between Fox News and MSNBC amount to the choleric disagreement between the Yooks and the Zooks in Dr. Seuss’s The Butter Battle Book. Neither network questions the basic assumptions of their corporate masters. Day after day of gobbling up the news as dished out by CNN, the perceived middle-of-the-road cable news outlet, does not make a consumer well informed so much as well suited to be a foot soldier in the corporate takeover of America and its transformation into a full-blown police state.
— Ed.