No Water for Them

January 22, 2019 Isidore Gnome
Is there any substance more essential to life than water? More precisely, clean and plentiful water for drinking? A person can survive weeks, and even months, without food; without water, a person can live at most a week. Water is so essential that in 2010 the United Nations (UN) passed a resolution recognizing access to a clean and plentiful supply as a basic human right. There were not any “no” votes, because after all what nation wants to go on record as being indifferent to the plight of poor children without access to wholesome drinking water? There were, however, 41 nations abstaining, taking the coward’s way out, and among them was the United States.
Besides moral cowardice, that abstention reflects the undue influence of enormous corporations such as Nestlé, which wants to corner the market on potable water for profit. People the world over do have to pay for food, though complete private ownership of all the world’s drinkable water goes too far, a plan the UN resolution attempted to forestall. Into this dispute about the human right to water stepped an organization called No More Deaths which has been dispatching volunteers into the Arizona desert to deposit supplies of water and non-perishable food for Hispanic immigrants crossing into this country. 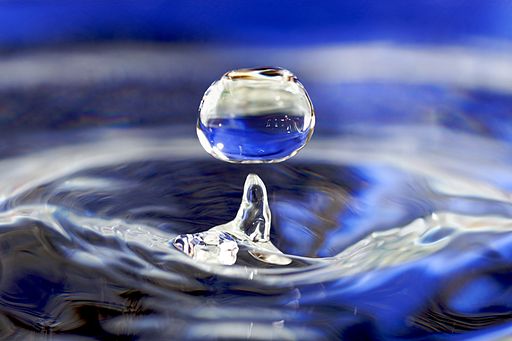 A water drop. Photo by José Manuel Suárez.
Four young women volunteers for No More Deaths were found guilty on January 18 by a federal magistrate for the misdemeanors of doing just that in the summer of 2017. They appeared before a federal magistrate because they committed their offenses in the Cabeza Prieta National Wildlife Refuge. Federal authorities charged them with littering, entering the refuge without a permit, and operation of a motor vehicle within the wilderness area. They did these things in the interest of supplying humanitarian aid. Meanwhile, during the current partial federal government shutdown, vandals are tearing up national parks solely for their own twisted sense of fun and getting away with it.

Are the Hispanic immigrants crossing into this country illegally? Yes, they are. Did the volunteers for No More Deaths enter Cabeza Prieta without a permit, riding in a motor vehicle, and then leave behind items? By all accounts, yes, they did. In the larger picture those points disappear before the undeniable fact the immigrants are human beings in need of water for survival as they cross a desert, and the survival beacons maintained for them by the United States Border Patrol are either inadequate or suspected by the immigrants of being traps. Humanitarian organizations stepped in to provide aid when they saw the deadly effects for the immigrants.

In this scene from the 1959 film Ben-Hur, directed by William Wyler and starring Charlton Heston in the title role, a chain gang of criminals overseen by Roman soldiers pauses in Nazareth on their way to a seaport, where presumably all the criminals, like Ben-Hur, will be put to hard labor at the oars of ships. The fellow who mercifully gave Ben-Hur water was fortunate not to be clapped in irons for His transgression. No doubt the authorities caught up with Him eventually.

As part of the current presidential administration’s callous disregard for human rights, Border Patrol employees in uniform have been pouring out onto the desert the water from the jugs they find left behind by humanitarian groups. It’s difficult to say which officially sanctioned action is more inhumane – depriving desperate people of water or wrenching children away from their parents. What sort of people are we? More precisely, how much can decent people tolerate the brutality of indecent people who claim to be doing righteous things? And whether the brutes are true believers or disingenuous opportunists matters not one bit to those who suffer at their hands.
— Izzy