The Path of Least Resistance

January 6, 2019 Techly DoRight
There are a confusing amount of options for protecting home electronics from power surges coming both from within the home and outside it. Within the home, surges can come from refrigerator or air conditioner compressors turning on; and outside the home, surges can come from electrical storms or power company lines. Looking for answers on the internet is only slightly helpful, since there appears to be a dearth of black and white information from reputable sources, while there is a wealth of arguing shades of gray on forums.

Surge protectors of the kind most home electronics users will find convenient and affordable. The one in the middle includes coaxial cable connections. Photo by Stevebwallace.
This post does not propose any definite answers to the trickiest questions about surge suppression because there is a strong element of safety at issue, both to electronic equipment and to a home and its inhabitants. When it comes to solving electrical problems, there is no substitute for calling in a trustworthy and knowledgeable professional electrician. Clerks at electronics stores may or may not possess those qualities. Their primary quality lies in selling electronics, which doesn’t necessarily negate the other qualities, but the wise customer regards their advice skeptically so as not to end up like the customer played by Albert Brooks in the running store scene from his 1981 film Modern Romance, in which his brother, Bob Einstein*, plays a store clerk who ruthlessly upsells Brooks.
The first thing to know is that a power strip is not a surge protector. The second thing to know is that if a surge protector has coaxial cable connections for television or internet service, it is not absolutely necessary to use them. This is a matter of some controversy, and a researcher can end up floundering in internet forums looking fruitlessly for a black and white answer. Mainly it is important to understand that the best protection for electronics from surges traveling over coaxial cables coming from outdoors is proper grounding of those cables, preferably with a metal gas discharge tube integrated into a grounding block. Grounding is a complex subject and as such should be addressed by a qualified electrician when there is any doubt about it.

There is the question of signal loss when using a plug-in surge protector’s coaxial cable connections, and despite all the argument about it, throwing around of terms like “insertion loss”, difficulty of determining said insertion loss from manufacturer’s specifications, or use of expensive diagnostic equipment, the simplest answer comes from taking advantage of the signal diagnostics included within the settings menus of all modern televisions. Check the signal strength and quality with the surge protector connected in the cable loop and then again without it connected. A decent plug-in surge protector should show negligible signal loss. Signal is signal, and therefore the same diagnostic results for a particular plug-in surge protector should apply to internet signal. Length of cable runs and quality of the cable and its connectors will usually be the more important factor affecting signal loss.

The last thing to consider when using the coaxial cable connections of a plug-in surge protector is whether it creates a ground loop. That’s a subject which can make anyone but an experienced electrician dizzy, and for those folks who are hopelessly confused and have thousands of dollars invested in home electronics, it would be best to consult an electrician. For everyone else, it is best to understand a ground loop is not inherently dangerous, as long as everything is indeed grounded. A ground loop caused by differences in electrical potential between pieces of equipment introduces a buzz or hum of interference, and the easiest and cheapest way to minimize the problem is to clamp ferrite beads, or chokes, on the ends of coaxial cables and power cords. 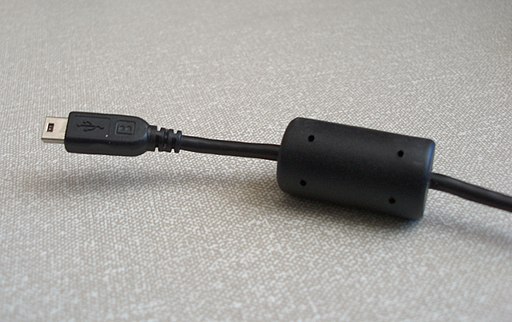 The end of a USB (Universal Serial Bus) cable with a ferrite bead, or choke, included along the line. Many cables for electronic equipment are manufactured with such ferrite beads molded in place on them, a good indication they actually work as intended. Photo by Stwalkerster.
Again, the best safety feature of any home electronics setup is proper grounding of coaxial cables and power cords, giving a path of least resistance for power surges, whether they arise from inside or outside the home. Add a quality surge protector to prevent damaging current from traveling the live wire into sensitive electronics and it will save them most of the time as long as dangerously high current has a path out of harm’s way.
— Techly

* Bob Einstein, most well known for his persona as daredevil Super Dave Osborne and for his role as Marty Funkhouser on the TV show Curb Your Enthusiasm, passed away on January 2 at the age of 76. R.I.P.