January 4, 2019 Vita Historia
“To promote the Progress of Science and useful Arts, by securing for limited Times to Authors and Inventors the exclusive Right to their respective Writings and Discoveries.”
— Article I, Section 8, Clause 8 of the United States Constitution

Celebration of the unofficial holiday of Public Domain Day on January 1 is ordinarily bigger in Europe than in the United States except for this year, when extraordinary circumstances brought it into the news. Because of the Copyright Term Extension Act (CTEA) passed by Congress in 1998, there was effectively a 20 year moratorium on works passing into the public domain in the United States, making this January a special occasion because of the backlog of works coming into the public domain all at once. 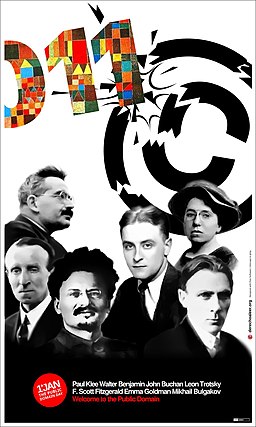 A European Public Domain Day poster for 2011 noting the artists and writers whose works would move into the public domain. Poster by derochoaleer.org.
Copyright has always been a double-edged sword in that, as the wording in the Constitution states, it protects the rights of authors, but unstated in Clause 8 is the protection for creative rights extended to corporations by later legislation. Those rights have been inferred by lawmakers. This has been a matter of some controversy, as noted in the derogatory nickname for the CTEA as the Mickey Mouse Protection Act. It’s hard to parse out the rights of struggling authors from the rights of billionaire corporations that (who?) hire struggling authors and artists and place their works under the corporation’s copyright.
It’s good that writers and artists have their financial interests in their works protected for, as the Constitution states, “limited Times”. Those limited times extend beyond the lives of the creators, continuing to grant returns to the creators’ heirs or designated beneficiaries. But then exclusive rights end, as they should so that the public can more easily benefit from a work that has stood the test of time. The works of William Shakespeare and Mark Twain have certainly widened their circle of beneficiaries among readers and performers due to being in the public domain. 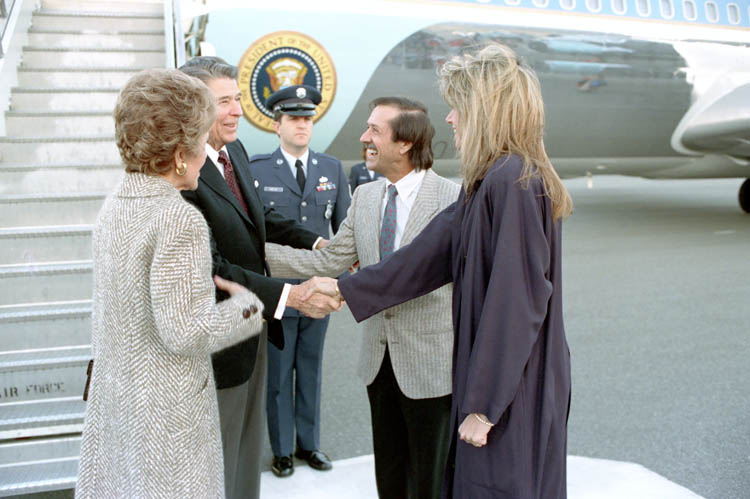 President Ronald Reagan with his wife, Nancy, greeted upon their arrival in Palm Springs, California, in December 1988 by Palm Springs Mayor Sonny Bono and his wife, Mary. Photo from the Ronald Reagan Presidential Library. Sonny Bono would later serve in the House of Representatives and, after his death in a skiing accident in 1998, would be succeeded in office by Mary Bono. With her support, Congress named the CTEA after Sonny Bono, even though he hadn’t had an especially strong attachment to the bill, having been merely one of twelve sponsors of a similar bill.
It seems the same rules pertaining to inherited artistic wealth could be and should be applied to inherited financial wealth. Why should the heirs of a monetary fortune be entitled to pad their nests in perpetuity with gains they did not secure themselves, or could not have secured without the advantage of great wealth? Heirs of artistic wealth, though they possess a legacy more worthwhile to the rest of humanity than money, are allowed to coast on it for only a generation or two before legal support is withdrawn and they have to make their own way in the world. Will the rules of inheritance, ingrained in humanity for as long as anyone can remember, ever change to reflect a more practical view of what a person is entitled to by birthright, the way it is in copyright law? Most likely not in the near term, but it’s important for the future to plant a seed now.
— Vita