Alone for the Holidays

December 18, 2018 Editor
Being happily alone while encountering people in daily life who can’t imagine not being married or having family and friends around occasionally brings up conversations where the socially active people express concern for the ones who don’t share their interest in a busy social life. Those conversations are more frequent around the holidays at the end of the year, and it rarely seems to occur to social people that the others, the loners, are sincere when they say they don’t mind being alone. It’s even more tricky for a loner turning away an invitation without hurting the feelings of the social person extending the invitation.
It would all be simpler if socially active people understood that while they are in the majority and their attitudes appear to be the norm for human beings, loners who do not share their outlook are not morally or psychologically deficient, or acting superior, when they express asocial behavior. Asocial, not antisocial. There’s a difference. An asocial person, a loner, might be shy and reserved around others, or feel most comfortable in their own company, but such a person is not antisocial. An antisocial person can also be characterized as a loner, but one who may harbor hateful, vengeful, and possibly violent feelings toward the rest of humanity. An asocial loner is confident and happy being alone, and does not begrudge the rest of humanity in the way of an antisocial loner like Travis Bickle, the eponymous character played by Robert De Niro in the 1976 Martin Scorsese film Taxi Driver. 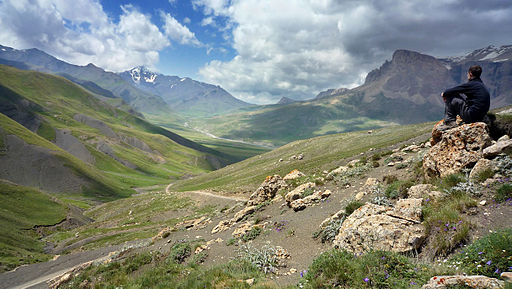 Landscape of Khinalug Valley in Azerbaijan. Photo by Matthew Hadley.
Around Christmas, the misunderstanding between social people and asocial people is heightened by the increase in social gatherings and invitations to same. It can be hard for concerned social people to discern the difference between a happy refusal of an invitation and a disinclination to be the cause of pity. Does “no” mean no? Well meaning people who don’t mistakenly judge well-adjusted asocial peers as antisocial loners in need of companionship nonetheless have difficulty taking no for an answer the first time. Sometimes the real need lies with the social person asking others about their holiday plans, in hopes of landing the companionship they want for themselves. They can even be desperate, like people flailing in deep water who climb on top of another swimmer. They are people who fear being alone, and though their sociability places them in the majority, they are not normal or healthy.

Perry Como’s 1954 rendition of “(There’s No Place Like) Home for the Holidays”.

This Christmas, don’t be afraid to turn down an invitation because that might seem unsociable, and therefore deviant. And don’t push for an invitation out of fear of spending the holiday alone. This Christmas, try to be happy with the situation as it is, and if that means flexing the definition of home for the holidays, then find comfort in that because there are far too many who cannot find a home, in any sense of the word.
— Ed.