Find a Better Way to Give

December 16, 2018 Isidore Gnome
Animal shelters in Germany are imposing a ban on pet adoptions this Christmas in hopes of discouraging the poorly thought out and whimsical decision to give a pet as a gift. Animal shelters in Germany and in other countries celebrating Christmas have always had to cope with a surge in animal drop-offs after the holidays, as families come to grips with the realization their decision was poorly thought out and whimsical. As always, it is the animals who suffer. Don’t add to the problem this Christmas by giving a pet as a gift. A pet is not a gift to be returned after the novelty wears off, but a living being deserving of and requiring commitment to his or her care.
Perhaps animal shelters in other countries will follow the excellent example set by the German shelters. Unfortunately there are still pet shops and breeders who will sell animals to nearly anyone who has the money. It’s more likely that the kind of person who visits an animal shelter to adopt a pet is not the kind of person who is as cavalier about that pet’s well-being as someone who purchases an animal from a pet shop or breeder and considers the creature a commodity or toy. Animal shelters often charge to adopt a pet as well, but in their case the fee is not for profit but to help offset costs of running the shelter, and as a hurdle, however low, to impulse adoptions. 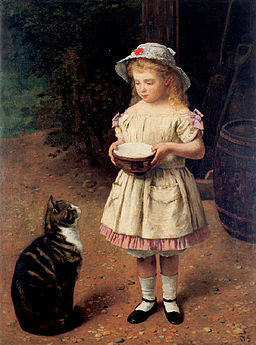 Child with Cat, a painting by Otto Scholderer (1834-1902).
In a better world, there would be no pet shops and breeders selling animals. In a better world, the necessity for animal shelters would dwindle because responsible people would take care of the first priority in pet adoption and have their pet spayed or neutered. But until a better world comes into being, reconsider giving a pet as a Christmas gift and consider instead making a financial donation to an animal shelter. The youngster whose heart is set on adopting a pet can, with the help of an adult in the family, volunteer a few hours a week at an animal shelter to help with the care, feeding, and socialization of the animals. Once the youngster gets a real grasp on the commitment required, then it may be time to consider adoption as a responsible and giving way to bring a new member into the family, not as the equivalent of a toy under the tree on Christmas morning, without needs or feelings.
— Izzy