December 11, 2018 Techly DoRight
The vinyl record revival that started after the turn of the century continues to this day, and is even picking up momentum as younger people discover vinyl record albums anew. It’s encouraging to see renewed enthusiasm for the old format because it means manufacturers will produce new equipment for playback of 33 and 1/3 long playing albums, and some record companies will also press new albums in the format. The 45 revolutions per minute format has fewer adherents, and consequently there will be less quality equipment made for its playback.
In the 1950s, 60s, and even into the 70s there was a large market in 45 rpm records with a single song on each side. Typically 45s were played by teenagers on cheap portable record players they kept in their rooms. Those record players were capable of playing LPs, but their owners more likely used them for the cheaper 45s. Sound quality was not the biggest concern with those portable players. Now fast forward 50 years and there is a glut on the market of relatively cheap, poorly made portable record players with retro designs meant to evoke the teeny bopper record players of times past. There lies a dead end to the vinyl revival. 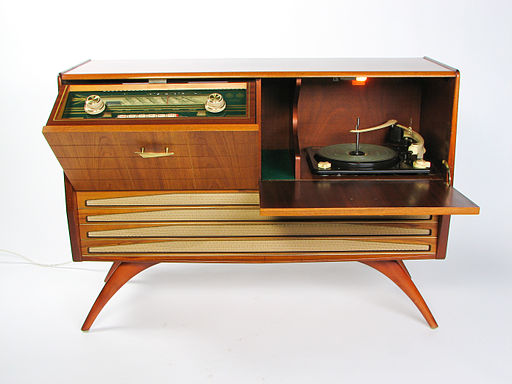 A Swedish made Radiogrammofon Granada III. Photo by Dan Johannson. It was not uncommon in the mid twentieth century for well made stereo playback equipment to be housed in well appointed pieces of furniture such as this console.
The main point of the resurgence in interest in recordings pressed on vinyl is that it is driven by audiophiles looking for better quality sound than can be found on digital recordings. A secondary point relates to maintaining playback equipment for old vinyl record collections. That by itself is heartening news, because there are unfortunately too many people with media files of one sort or another they are unable to play back because manufacture of the appropriate equipment has been discontinued. Vinyl at least has new life in that regard.

Just don’t expect younger people to understand the reason for the revival and the superiority of vinyl in the ears of audiophiles when their only experience of it comes from a shoddy portable record player. Using such poor equipment, its appealingly retro design aside, misses the point of the vinyl revival. In the old days, some people had no choice but to use cheap record players. There were no other options such as compact disc players, MP3 players, cassette decks, or even 8 track players, bad as they were, until later on in the 70s. In the middle of the twentieth century, for the majority of music lovers vinyl record players covered all the options from high end to low end for all but the few who used reel to reel tape decks.

The owner of this Sanyo Hi Fi manufactured in the 1970s and built into its own furniture enclosure was good enough to share his enjoyment of it on YouTube and, admirably suited to showing off this mid-twentieth century ensemble of hi fi with wood cabinets is the owner’s selection of “Early to Bed”, a swinging tune by Elmer Bernstein from the movie soundtrack to The Silencers, the 1966 entry in the Matt Helm series of spy movie spoofs.

Now the situation is different, with many more options for listeners. Buying a cheap, poorly made record player now misses the point, pleasant as it may be to imagine teenagers listening to individual pop songs on 45s played through tinny speakers in their room rather than blasting the rest of the family out of the house with a more powerful system. Those days are over. The vinyl revival now is for audiophiles and record collectors, probably nearly all of them at least in their twenties. To play vinyl LPs now and enjoy them for what they’re worth it’s necessary to spend the money for high end playback equipment. Otherwise, with many easier options available, what’s the point?
— Techly