December 10, 2018 Vita Historia
Snow has always been more problematic for movie sets than rain, but when the filmmakers and their special effects people do it well it creates an atmosphere for viewers that suspends their disbelief to the point of not noticing smaller details, like how the snow fallen on performers doesn’t appear to melt quickly when they go indoors, where it is presumably warmer than it is outside. All sorts of obstacles dictate the use of fake snow for movies rather than the real stuff, from warm weather outdoors to shooting scenes indoors on sound stages. Real snow also compacts underfoot, making it impracticable for filmmakers to get more than one or two takes in one spot outdoors even when they go to the trouble of brushing over footsteps to make the snow appear fresh for retakes. As expensive as it is to make a movie, it makes sense to use fake snow.
In the early twentieth century, filmmakers created fake snow with bleached cornflakes, salt, flour, cotton wadding, asbestos, or combinations of those materials as well as others. All posed problems either of realism or health and safety. Cornflakes crunched underfoot and were difficult to use once sound came into movies; salt was corrosive; flour congealed on exposure to moisture; cotton was a fire hazard, and its replacement, asbestos, was a health hazard. Filmmakers experimented with many materials, but it wasn’t until Frank Capra’s 1946 film It’s a Wonderful Life that they came upon a winning formula which was realistic and safe. 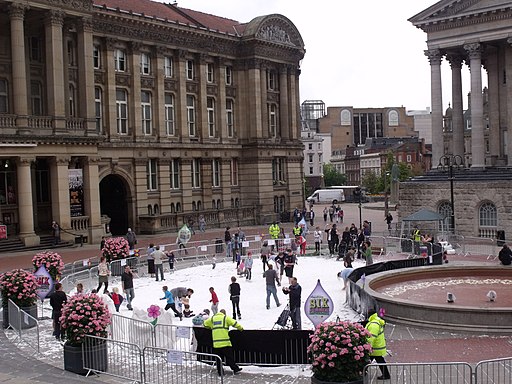 Fake snow attracts visitors to Chamberlain Square in Birmingham, England, in August 2011 as part of the Six Summer Saturdays festival. The fake snow was supplied by Snow Business, an English firm that has also used the material on many movie sets. Photo by Elliott Brown.
For that film produced by the studio RKO (Radio-Keith-Orpheum), special effects supervisor Russell Shearman helped create a mix of foamite – a fire extinguisher material – with sugar, water, and soap flakes. Mr. Shearman’s snow effects were so convincing that the Academy of Motion Picture Arts and Sciences gave him and his special effects department a Technical Achievement Award for their work on It’s a Wonderful Life. Watching this Christmas classic over 70 years later, after special effects have made huge advances in duplicating reality, and noticing how at the end of the movie the “snowflakes” on Jimmy Stewart’s shoulders take a long time to melt when he comes indoors to a warm reception from his family, friends, and neighbors, should not detract from anyone’s enjoyment of a great cinematic moment or the filmmakers’ expert creation of George Bailey’s (Stewart’s) snowy odyssey one long Christmas Eve in the fictional New York town of Bedford Falls (or its nightmare alternative, Pottersville). Movie magic at its best suspends the viewer in another world for a time, and on the few occasions when the artifice shows through, it’s charitable not to be too picky and to brush them off.
— Vita