Progressive Democrats like Alexandria Ocasio-Cortez, newly elected Representative from New York’s 14th Congressional District, have their work cut out for them even before they take their seats in January as they battle the Old Guard within their own party. The Old Guard of the Democratic Party, led by Nancy Pelosi in the House and Chuck Schumer in the Senate, are working to co-opt, minimize, and undermine the incoming progressives so that business as usual shall continue after January. The Old Guard appears to have little interest in understanding that business as usual by corporate Democrats such as themselves is what brought this country to the precipice of authoritarian rule by the current president and his accomplices in Congress and the judiciary over the past two years. 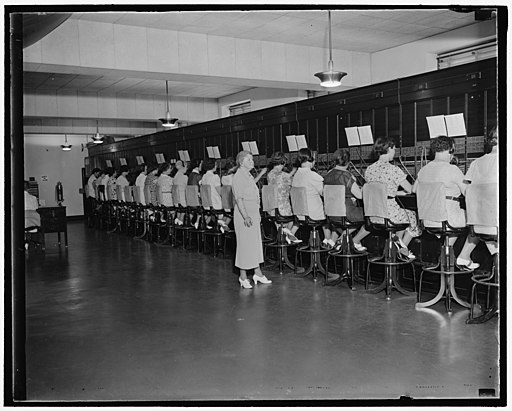 Harriot Daley, standing, was appointed telephone operator at the United States Capitol in Washington, D.C., in 1898 when there were only 51 stations on the switchboard. On July 30, 1937, when this photo was taken, Miss Daley was Chief Operator and supervised a staff of 37 operators as they answered calls from 1200 extensions. Library of Congress photo by Harris & Ewing.
Corporate Democrats are a better option for leading this country than fascist Republicans in the same way that a kick in the behind is marginally better than a kick in the groin, but that’s hardly a hearty endorsement of their policies and practices. That is not a positive view of the future for young people starting out and raising children of their own into the world. There has to be a better option still, one that is outside the stale choice between the lesser of two evils, both of them more interested in serving corporate interests than those of the people at large. The Old Guard of the Democratic Party will continue trying to scare progressives into backing down from real change by claiming they are splintering the Party and allowing the minority party, the Republicans, to win votes in the House of Representatives and pass their agenda.
There’s truth in their argument, too, particularly since Republicans historically are more likely than Democrats to maintain lock step with their colleagues in the face of opposition and subsume their differences, but it doesn’t necessarily follow that progressives should move to the center and join ranks with the corporate Democrats instead of the other way around. What’s needed to convince corporate Democrats to drop Old Guard methods and beliefs, besides not re-electing them time after time, is pressure from ordinary citizens that builds to a point overpowering their allegiance to corporate money.

Phone calls. E-mails. Snail mails. Attendance and vocal presence at town halls. Boycotts of corporations making large political donations. Taking to the streets. Voting in local elections for school board and county supervisor and city council seats. Knocking on doors to get out the vote and helping people register to vote. Speaking up when someone among your friends, family, or neighbors expresses hateful ideas counter to our democratic principles. Refusal to participate in the national security state by calling for the repeal of the PATRIOT Act and the National Defense Authorization Act (NDAA) and condemning the persecution of whistleblowers like Chelsea Manning, Edward Snowden, and John Kiriakou.

The presentation in Frank Capra’s 1939 movie Mr. Smith Goes to Washington probably strikes most people today as corny, but that should not overshadow the principles of good government and citizen participation it espouses and their relevancy today.

Starting and supporting statewide initiatives such as California’s Proposition 11 in 2008 which took legislative district reapportionment away from partisan politicians and gave that power to the people. There are many more ways to convince business as usual Democrats in Congress and across the nation that the future for them and us lies in their scooting over to the left, in the direction this country came from before it swung too far right in the last generation, rather than stubbornly obstructing progressives in order to better serve their corporate masters. Getting up off the couch and making phone calls and doing the other things is the only way to make it happen.
— Ed.