November 9, 2018 Isidore Gnome
People who don’t do hard physical labor regularly are quite taken with tools that make it appear the person wielding them is really doing a lot, such as pickaxes and sledgehammers. Using those tools will indeed wear out even the fittest person over the course of a day, which is why the professional laborer who has to get up the next morning and work again all day uses those tools sparingly given the option, and will resort to other tools that may take longer to do a job but will save wear on tear on the user’s body. 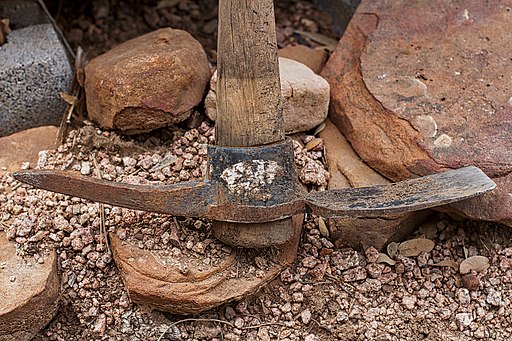 A pickaxe works best at breaking up hard ground. Photo by cogdogblog.
A pickaxe is good for breaking up dry, rocky ground, but not as good for working on normal soil as a mattock. A pickaxe is a better tool overall for a miner than it is for a gardener. Swinging it certainly does make it look like the laborer is going at the job full bore, however, and ultimately that may be what it takes to satisfy the homeowner who is paying the laborer to make work look chain gang hard. Sledgehammers are more directly up that same alley, since they have limited uses in everyday gardening, but are great for breaking rocks in a sweaty, back-breaking setting. Maybe that’s what some people are paying to see.
Another tool amateurs feel compelled to use themselves and are gratified to see professionals use on their behalf are powered shears. About the only shrub that can tolerate shearing long term is privet; everything else will turn into stiffly twigged shells of foliage needing frequent shearing to look presentable, and that only at a passing glance. Any closer examination will reveal a shrub with nothing going on inside but the dead, moldering pile-up of sticks and leaves from past shearing.
It’s better to cut back shrubs with hand pruners, even though a hedgerow will take longer to do than with powered shears. The time will be made up in longer intervals between cuttings, and the shrubs will be healthier. It’s fussy work and it doesn’t make a lot of noise and commotion like the powered shears do, and that upsets some people who like the roar of machinery as much as the sweat of unnecessarily hard physical labor in order to convince themselves that work is being accomplished. 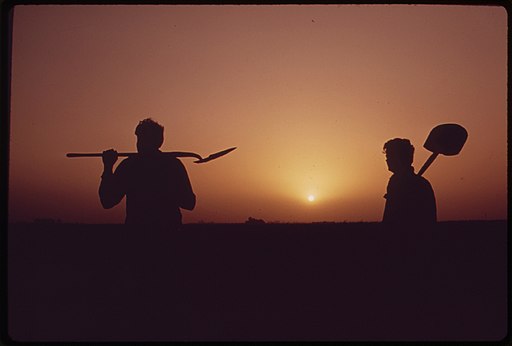 Farm workers shoulder their tools at the end of the day near Ripley, in the Palo Verde Valley of the lower Colorado River in California in May 1972. Environmental Protection Agency photo by Charles O’Rear.
A few good shovels, hand pruners and saws, maybe loppers, powered or manual shears for cutting back perennials only instead of cutting back shrubs, and various rakes as well as a strong digging bar are about all a gardener needs on a daily basis. It’s nice to have the other tools, mattocks and hoes especially, but a gardener interested in saving himself or herself for another day will seldom find use for a pickaxe or a sledgehammer. There are often other ways of accomplishing the tasks those tools might do, though they won’t look as dramatically labor intensive.

Take the Money and Run, a 1969 film directed by Woody Allen and in which he plays a hapless criminal, who in this scene has been sentenced to work on a chain gang.

The last thing a professional or amateur gardener might want to consider is rain gear, and that too ends up being a personal choice outside of what bossy people might think best for others. Ponchos are cooler to wear in summer than raincoats and permit greater freedom of movement, while raincoats are more effective at keeping the gardener dry. A raincoat would be the best choice in cool weather, and might even suit in summer if the gardener parts with several more dollars for a raincoat made with breathable fabric. Otherwise, a cheap raincoat will repel rain on the outside at the cost of getting wet on the inside from the wearer’s sweat, particularly in the case of someone who is active, like a gardener. Perhaps the most welcome option on a rainy day is a third one, which is the opportunity it affords to drop tools and go indoors to relax and muse about working some other day.
— Izzy