Voting Should Be Easy

November 4, 2018 Techly DoRight
Over 75 percent of the American people have smartphones, and since voter participation in elections hovers around 50 percent of eligible citizens, the idea has come around to increase voting by making it possible for people to use their smartphones for that purpose. This year, West Virginia is trying out smartphone voting on a limited basis. The biggest concern with this practice is ballot security from smartphone to tabulating facility, usually a government office such as in a county courthouse. The medium used for that transmission would, of course, be the internet. 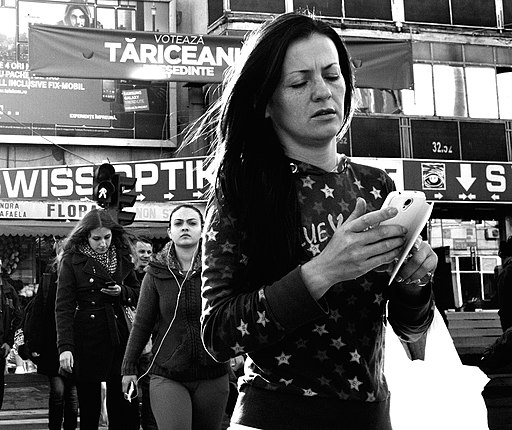 Pedestrians in the Rahova neighborhood of Bucharest, Romania, on October 27, 2014, days before the first round of the Romanian presidential election on November 2. Photo by J Stimp.
Now the internet is many wonderful things, but numbered among them is not airtight security for the general user. Some users haven’t the faintest idea about or concern for the security of their system, whether it be on a desktop or laptop computer, a tablet or a smartphone. It’s clear that the integrity of internet voting by smartphone or any other device would need to be maintained by a third party, since the users themselves are unreliable.
The voting system would have to be capable of freezing out “man-in-the-middle” hacks, which have historically been the greatest vulnerability of internet communications and the most commonly exploited by hackers. Think of it as the postal system, in which Party A mails a letter to Party B by entrusting it to Party C, in this case the United States Postal Service, with the understanding that in between point A and point B no one will intercept and read it, save perhaps a Postal Inspector who can show probable cause.
The internet has never been even as secure as the postal system. More often it has been like the party lines that used to exist on some phone systems around the country. Until the security problems can be fixed, smartphone voting is unlikely to see widespread use. The safest system for voters is still paper ballots filed either by mail or in person at a polling place. Voting should be easier, not more difficult, as all the voter suppression laws passed by Republican controlled state legislatures have made it, with the idea that low turnout favors their candidates. 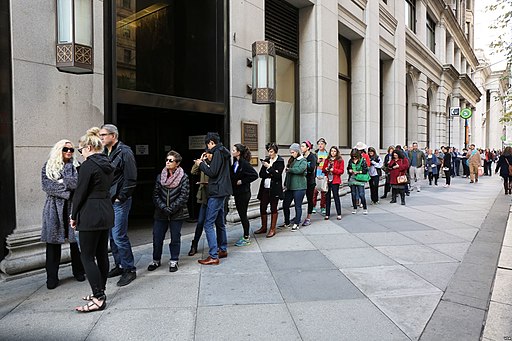 Voters wait in line to cast their ballots in the U.S. presidential election in Philadelphia, Pennsylvania, on November 8, 2016. Note how some are looking down at their smartphones, a common sight in public places now. Photo by Voice of America News.
Relatively few people are motivated to spend a long time waiting to vote in a queue that may keep them outdoors in bad weather, though some do appear willing to endure similar conditions in order to purchase the latest iPhone. Smartphone voting is a great idea for increasing participation in elections, but sadly it is one that needs work before becoming wholly viable, if it ever does. Until then, voters can still bring along their smartphones to their polling places to keep themselves entertained while they wait.
— Techly