October 26, 2018 Isidore Gnome
The title of this post is taken from the Ogden Nash poem “Reflections on Ice-Breaking”. Mr. Nash was writing about parties for adults, and he concluded the poem with the lines “But liquor/Is quicker.” For children at Halloween, the first lines about candy are the only ones that matter. After a bout of shepherding their children around the neighborhood for trick or treating, parents are more apt to grasp the last lines.
The association of candy with Halloween is relatively recent, and is wholly artificial in origin. Candy makers and sellers gravitated toward the holiday in the early twentieth century as a way to increase sales in the long lull between Easter and Christmas, and by the post World War II era modern Halloween traditions were pretty firmly in place. Children still might get some healthier treats like fruit in their treat bags or baskets, but after numerous tampering scares factory wrapped candies became the predominant treat, much to the relief of children everywhere. 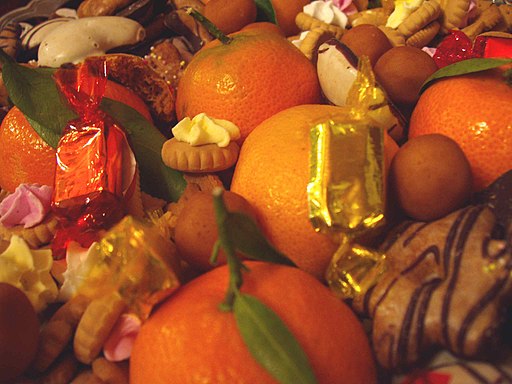 Friandises, the French term for goodies. Photo from French Wikipedia by Ficelle.
Because of ongoing fears about tampering and because of related worries over children interacting with strangers, the Halloween trick or treat excursions of mid and late twentieth century America have most likely peaked and are now on the wane, probably to the relief of parents everywhere. People don’t know their neighbors as well as they used to, and the whole ritual has become an unnecessary risk. Children still enjoy dressing up in costumes, and of course the idea of an enormous haul of candy still exerts a sirens’ pull on them. Like Christmas and its excesses, Halloween has become a time for parents to set and teach limits, if they are inclined. It’s difficult to do when the greater society constantly tugs in the other direction.

While the children are celebrating with restraint, willingly or not, their parents might take a moment to remember the candies they enjoyed as children. One candy, Necco wafers, may be no more after this year. The company that made them and other treats shut down earlier in the year, and its unclear whether the new owners will continue production of any of them. The New England Confectionery Company (NECCO) had been in business since 1901, after consolidating the operations of two other candy companies. Its flagship candy, Necco wafers, had been in production since before the Civil War.

That’s Charlie Brown in the sheet with too many holes, and Lucy in the witch costume, in the 1966 television special It’s the Great Pumpkin, Charlie Brown.

Like a lot of candies, candy corn for instance, Necco wafers arouse strong feelings either for or against them. Perhaps it’s because our opinions about candies are mostly formed in childhood that we develop lifelong allegiances or antipathies to them. The parents who affectionately remember candies their children find revolting may be likewise turned off by all the gummies and other newly popular treats. Though he likely didn’t have Halloween in mind when he wrote “Reflections on Ice-Breaking”, Ogden Nash managed to put it all in perspective anyway, and in only seven words.
— Izzy