October 16, 2018 Editor
With this year’s midterm election three weeks away and an enormous amount at stake regarding what sort of country voters want to live in, it’s a safe prediction that turnout will be higher than usual, perhaps at a record level. Midterm elections have historically drawn out only about 40 percent of eligible voters, compared to about 60 percent in presidential election years. There are so many cultural issues at stake in this first national election since 2016 that people are more likely than ever to turn out at the polls despite the relatively good economy, which ordinarily would be a reason for complacency and low turnout.

High voter turnout typically favors Democratic candidates, and that should hold true this year as well, but turnout by Republican voters should be high as well on account of the fires being stoked by their leader in the Oval Office, the Divider-in-Chief. In rally after rally and through draconian policy actions meant to provoke an outraged and, in his view, pearl-clutching response from the opposition, the Republican Party’s national leader inflames his base with culture war issues distorted and amplified through their partisan media outlet, Fox News. Ramming Supreme Court nominee Brett Kavanaugh through the relatively wet noodle opposition on the Senate Judiciary Committee served the Divider-in-Chief’s purposes admirably, giving him and his base a win in the culture wars against liberals. Whether Mr. Kavanaugh’s service on the Court will improve the rule of law in this country, or even respect it, is besides the point as far as they are concerned. 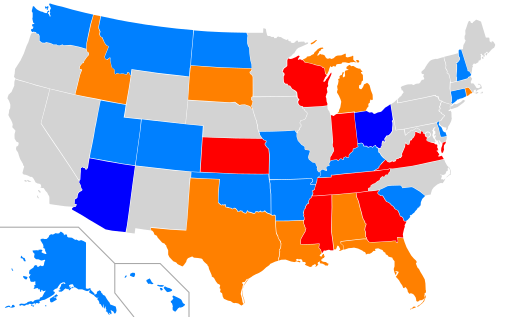 Map of Voter ID laws in the United States, Strict vs Non-Strict (November 2016).
Red ——– Photo ID required (Strict)
Orange —- Photo ID requested (Non-strict)
Dark Blue – Non-photo ID required (Strict)
Light Blue – Non-photo ID requested (Non-strict)
Gray ——- No ID required to vote
This map may not be up to date. Check with your local registrar if you are unsure. Map by Peterljr888.
With the Republicans fired up and their unofficial paramilitary offshoots among white supremacist organizations feeling emboldened by Supreme Leader and by the police, it’s also a fair prediction that voter intimidation efforts at the polls by those groups will be higher than ever this year. Supreme Leader has signaled numerous times to the lunatic fringe of the alt-right that he has their backs, and the police have done the same by standing by passively while white supremacist groups have rioted and dealt violence to counter protesters, most prominently in Charlottesville, Virginia, in August 2017, and again recently at altercations in Portland, Oregon, and in New York City.

If voters are intimidated at polling places this year by over zealous followers of Supreme Leader, it is perhaps not advisable to rely on reporting the matter to local police employees. It is probably better to follow the guidelines of the American Civil Liberties Union (ACLU) and call the Election Protection Hotline at 866-OUR-VOTE, or the Department of Justice Voting Rights Hotline at 800-253-3931. The ACLU also advises contacting an attorney, but as that can add up to a lot of expense, it helps to realize the Election Protection Hotline is run by the Lawyers’ Committee for Civil Rights Under Law and can help with legal questions pro bono. Now that everyone in the country has had two years to observe where the Divider-in-Chief and his cohort want to take the country, to unsavory places where the rule of law is not respected and where only the rich benefit from the nation’s wealth, it has never been more clear how much voting can make a difference in the sort of country we claim to be than in this year’s midterm election. Vote!
— Ed.