October 12, 2018 Techly DoRight
The latest United Nations Intergovernmental Panel on Climate Change (IPCC) report lays out a stark timeline for how long we have to reduce our carbon emissions to avoid crossing the threshold of a 1.5 degree Celsius rise in global temperature leading to catastrophic effects for life on Earth. Paraphrasing the report, at present levels of emissions we have until 2030, or 2050 at the very latest. To avoid the worst case scenario, we will need to cut emissions in half by 2030, and cut them entirely by 2050. Given the conservative political and capitalist landscape prevalent today, meeting those targets does not seem likely. 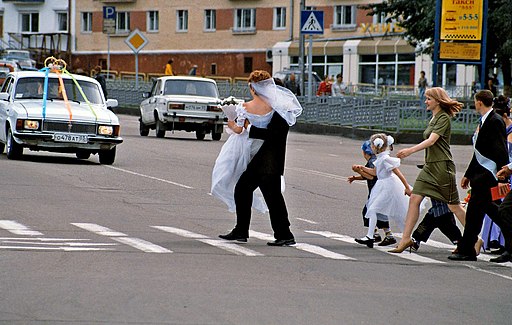 A wedding party crosses a street in 2006 in Oulan-Oudé, Republic of Bouriatia, Siberia, Russia. Photo by Cyrille (Suleiman) Romier.
Since national governmental and business leaders will not take the initiative on this issue because it conflicts with the greed of the status quo, it will be up to local leaders and citizens to address the problem. There will be calls to use technology, such as geoengineering, and wholesale adoption of driverless cars and electric vehicles. Those are attempts at a fix that are best implemented by national organizations on a large scale, and cannot be relied on considering the need for national consensus and funding. Geoengineering may work to a limited degree, though it would certainly be subject to the law of unintended consequences. Tweaking the worldwide car culture would have more limited effects since improving the efficiency of how cars are driven and shifting their emissions from the tailpipe to the smokestack would ultimately amount to rearranging the deck chairs on the Titanic.

What’s needed is a wholesale change in the approach to daily living, particularly among the citizens of the world’s wealthier countries. Start with walking. Every day, everywhere. Build sidewalks. Get cars, driverless, electric, or otherwise, off the roads entirely. Bring back public transportation for trips that are impractical for walking. People will have to demand improvements in public transportation and pedestrian infrastructure through their votes and their dollars, rather than waiting on public officials and corporate executives to make the necessary changes. As a quote popularly attributed to Mahatma Gandhi has it, “Be the change you wish to see in the world.” And as he did, walk if you can, for yourself and for change in the world.
— Techly