With the full moon coming on Monday, September 24, it’s fair to wonder how much influence the moon, the planets, and the stars have on earthly lives and events. This full moon is known as the Harvest Moon for obvious reasons, at least in the Northern Hemisphere where the agricultural harvest begins in September. Linking the moon to telling time is sensible considering that through most of history people did not have or require time pieces accurate to minutes and seconds. That would await the Industrial Revolution. Before then, knowing the months by the phases of the moon and the hours by the daily movements (as it appeared from Earth) of the sun and the stars was good enough.

Where things got fuzzy and slipped from astronomy to astrology was the attribution by some people of powerful influences to the celestial bodies. Those influences went beyond gravity and tides to the extent of determining the character and fate of people. What an extraordinary hypothesis! Until the Renaissance, when Copernicus and Galileo disabused humanity of the notion that the Earth, and specifically its Homo sapiens inhabitants, were the center of the universe, people could indulge a belief in astrology and not be out of step with mainstream scientific thought. Now the idea that the moon, the planets, and the stars have any influence on people’s lives beyond the purely physical is magical thinking along the lines of palmistry and Tarot. 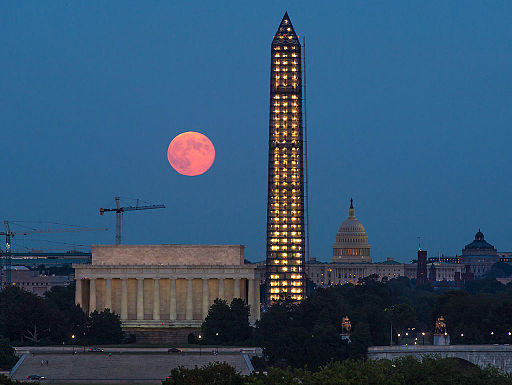 A Harvest Moon rises over Washington, D.C., on September 19, 2013. Photo by Bill Ingalls for the National Aeronautics and Space Administration (NASA).
Most people now believe astrology’s rightful place is in the same pages of their daily newspaper as the comics and the crossword puzzle, and certainly not in the science section. The trouble begins when people in authority ascribe credence to magical thinking, and by extension astrology and other pseudo sciences. The determinism of astrology appeals to people with an authoritarian mindset because it restores a kind of certainty to a life that has become, for them, uncertain and therefore frightening.

Feeling in control is comforting to them, even though oddly enough they are ceding control to an impassive universe. This is where the all powerful leader comes in, to reassure them that they are indeed still at the center of the universe and endowed by it with special qualities, rights, and privileges. The more thoughtful among them might reflect that special rights are accompanied by special responsibilities, but most are not troubled by such an uncomfortable thought, nor by the exclusion of The Other from the universe’s benevolence, as interpreted for them by their leader. What for most people is a harmless diversion in the funny papers becomes for a few true believers another reality, with its own truth they are determined to foist on everyone else. Ordinary people don’t take the true believers seriously at first, and then too late the decent, ordinary folks realize their fanatic neighbors weren’t kidding with their foolish, dangerous nonsense.
— Ed.