If It Keeps on Rainin’

September 18, 2018 Isidore Gnome
Difficult as it may be to find a silver lining to all the flooding brought on in the mid-Atlantic states by Hurricane Florence, there is something to be said for how flooding can rejuvenate soils, replenish groundwater, and also bring home to some people the foolishness of their ways. It’s terrible that poor people lost their homes because they have few options available for where they build them or, in the case of mobile homes, park them. The wealthy people who built expensive beach front properties should have less cause for sympathy from the rest of the population.
The newer difficulty with hurricane damage is due to the effects of global warming, and that is the rising problem of inland flooding. It used to be that the primary problems caused by hurricanes were storm surge along the coast and wind damage everywhere until they weakened upon moving inland. Lately, sluggishness in a warmer atmosphere causes more hurricanes to stall over land, where they drop upwards of tens of inches of rain inland over the course of days. Hurricanes now are less likely to move quickly after landfall, dropping less than ten inches of rain on inland locations. 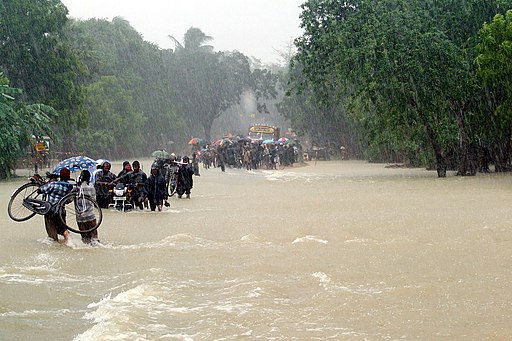 People in Vanni, Sri Lanka, coping with rainfall and flooding from Cyclone Nisha in November 2008. Photo by trokilinochchi.
People who haven’t foolishly spent riches on beachfront property within feet of harm’s way, people who have instead built their houses inland on properties well away from the dangers of storm surge, now find themselves nevertheless dealing with catastrophic flooding as hurricanes dump tens of inches of rain over their inland homes, overwhelming the capacity of present infrastructure to cope with those intense events. What are these reasonable people to do?

Kansas Joe McCoy and Memphis Minnie perform their original song “When the Levee Breaks” in 1929, a song which refers to the Great Mississippi Flood of 1927. Led Zeppelin performed their own altered version of the song in 1971, and that version has since become the most well known.

They can’t fight rising water; to try is futile. The best they can do is to to work with the water and give it a place to go. Levees don’t work without spillways. Paying attention to where the high ground is always pays off in emergencies, and it’s interesting how many people, divorced as they are from nature, fail to include it in their calculations when buying or building a house. Poor people often don’t have that luxury. Wealthier people, who have options, should not be bailed out by everyone else when their expensive houses slip underwater. The days of not taking severe weather events into account when choosing where to live are over. Escaping the effects of severe weather will be impossible, however, as people who have been flooded out of their inland homes hurricanes now know, and that leaves taking sensible measures to cope with the consequences of global warming in order to go on living.
— Izzy