September 4, 2018 Techly DoRight
The great engineering writer Henry Petroski, who has explored subjects as mundane as pencils and as sweeping as American infrastructure, always brings out the human element in both the design and the use of engineered products, and it is that aspect of his work which makes it fascinating instead of dryly technical. Mr. Petroski reminds us that the products of engineers and designers are wrought by fallible humans for the use of other fallible humans, and since humans have not changed greatly over the past 300 years or 3,000 years, then ultimately engineering and design are always processes of back and forth and of trial and error, even after a university education has instilled thousands of years of experience into its practitioners. Things can and do still go wrong, largely because of human error and human desires.
Take the humble bottle cap, or “crown” as it is known in the trade, and twist it off. Can’t do it? Then it’s a pry off cap, or crown, and requires an implement for dislodging it. Why the different designs? Isn’t there a best practice, and if so why don’t all makers of products put into bottles adhere to it? Specifically, bottlers of beer, some of whom use twist off caps, while others use pry off caps. Isn’t beer beer, no matter how it’s bottled? According to craft beer makers, no. William Painter, an American mechanical engineer, invented the pry off cap in 1892, and it remained the standard means of capping bottled beers and sodas until the 1960s, when twist off caps with good sealing capacity came on the market. 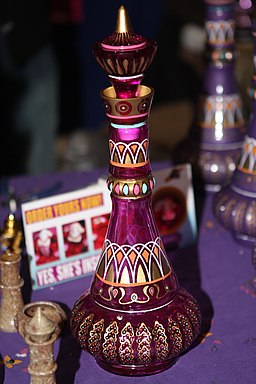 The prop genie bottle, with stopper, from the 1960s television show I Dream of Jeannie. Photo taken in June 2011 by Eva Rinaldi.
Major bottlers soon replaced their pry off caps with twist off, and customers were satisfied since the beers and sodas they bought were not flat due to carbon dioxide leaks going out of the liquid inside the bottles. There may have been slight leaks of oxygen into the bottles, but not enough that the average drinker of major brand American beers would notice. When craft beer makers first came onto the market in a big way in the 1980s and 1990s, many of them decided to eschew twist off caps in favor of pry off caps for several reasons. The machinery for pry off caps was cheaper than for twist off caps, which suited small scale brewers operating on tight margins. Then there was the slight difference in the tightness of the seal between pry off and twist off, which was more of a factor thirty years ago than it remains today after improvements in twist off cap seals. Lastly there was the impression that twist off caps were for cheap, indifferent domestic lagers, while most European imports still came with old fashioned crowns or stoppers, and an impression of higher quality along with their higher prices, an impression which lingers to this day.

It is perhaps the last reason, the purely psychological one, that retains a foundation for using pry off caps, and of course it amounts to pure snobbery. The snobbery over twist off caps is even worse when it comes to consumer perceptions about wine. The craft brewers contradict themselves, too, when they plump for selling their beers in cans instead of bottles. They claim, with good reason, that because of improved linings for aluminum cans there is no longer any reason for consumers to be prejudiced against buying beer in cans. Fair enough, but just as with twist off caps for bottled beer, there remains the perception among consumers that beer in cans is inferior not merely because of possible taint from the container, but because for years beer in cans was the cheap, low quality preference of working class people.

Chubby Checker had a big hit in 1961 with “Let’s Twist Again”, the follow up to his 1960 hit “The Twist”. Some folks may feel the follow up is the better song, but it doesn’t matter much in the end and comes down to personal preference.

Let’s stop pretending then and admit the main reason to crown a beer bottle with a pry off cap is to send a signal to the consumer that what’s inside the bottle is quality stuff. It may well be, but snobbery around rituals should not be the determining factor. That’s as bad as wine snobs who get upset over twist off caps even though vintners and wine aficionados alike claim twist off caps are an improvement to the quality of wines not meant to be aged extensively but drunk within a few years of bottling. And as to craft sodas in bottles with pry off caps, that is merely an excuse to charge a premium for a product of dubious value. At least beer and wine producers can lay claim to some health benefits for their nectars, despite their consumption by mere mortals who allow their preconceived notions to get in the way of enjoying a good drink.
— Techly