August 10, 2018 Techly DoRight
The current presidential administration trotted out their front man for ostensibly serious projects on Thursday, Vice President Mike Pence, to make the case for entangling the country in a boondoggle called “Space Force”. At first glance, this seems like a waste of national resources in an attempt to appease one special interest, defense contractors. Deeper scrutiny, however, uncovers Space Force as a waste of national resources on behalf of boosting the reelection campaign coffers of the current administration as well titillating the chickenhawks amongst their donors. The presidential administration is monetizing the creation of this unnecessary new branch of the military as if it were a television show. 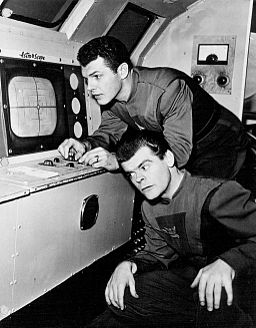 A September 1954 promotional photo from the television series Space Patrol. Ed Kemmer as Commander Buzz Corry works the controls of the space ship while Lyn Osborn as Cadet Happy Osborn looks on.
This latest development in the kleptocracy that is the current administration should not be surprising to those who have kept their cynicism up to date. The Space Force hubbub will also serve usefully as a distraction for the next week or two from real problems closing in on the administration, such as the investigation of Independent Counsel Robert Mueller into criminal mischief by the administration’s personnel and, before it, it’s campaign staff. More indictments are coming, and probably a subpoena for Orange Julius himself, who will no doubt waste millions of dollars of the taxpayers’ money fighting to avoid being dragged into court by asserting he is above the law. Meanwhile, in the fantasy land of Space Force, the gravy will be flowing for all the billionaire and millionaire defense contractor executives who profess libertarian ideals while feeding greedily at the government trough filled by their benefactors, Commander Buzz Corry and Cadet Happy Osborn, aka Orange Julius and the Duncy White Knight.
— Techly