The War on Economic Disadvantage

12 Then said he also to him that bade him, When thou makest a dinner or a supper, call not thy friends, nor thy brethren, neither thy kinsmen, nor thy rich neighbours; lest they also bid thee again, and a recompence be made thee.
13 But when thou makest a feast, call the poor, the maimed, the lame, the blind:
14 And thou shalt be blessed; for they cannot recompense thee: for thou shalt be recompensed at the resurrection of the just.

— Words of Jesus Christ quoted in Luke 14:12-14, the King James Version of the New Testament.

The current presidential administration has declared an end to the War on Poverty, and a victory for someone or other, certainly not the poor. Perhaps the rich, who can now go on plundering the nation without any nagging concerns for the poor. Not that the poor were ever a great concern for the rich, a disconnect that has been made easier over the past half century with sociological euphemisms like “economically disadvantaged” and “low income”. Sociologists and others with a bureaucratic and academic inclination to their thinking supposedly applied euphemisms for the words “poor” and “poverty” out of consideration for the feelings of people mired in “low resource” neighborhoods, among other things, but really they were doing those folks no favors. Good intentions merely made it easier for everyone in the “upper income brackets” to look the other way. 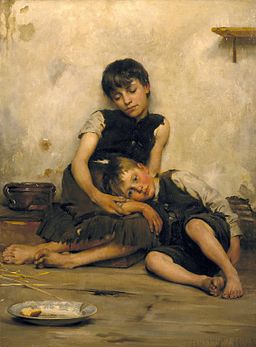 Orphans, an 1885 painting by Thomas Benjamin Kennington (1856-1916).
The War on Poverty is over then, and up is down and wrong is right. Two plus two equals five. “Just remember, what you are seeing and what you are reading is not what’s happening,” saith Supreme Leader. None of that rhetorical nonsense fills the bellies of the poor with nutritious food. It’s all sophistry. Anyone with eyes that see and who acknowledges the world as it is can attest there are poor people everywhere in need. Those poor people are more than “food insecure”, they are hungry, even starving. Academics, bureaucrats, politicians, and the wealthy can argue forever about how best to deal with the problem of the “economically disadvantaged” or “underprivileged”, and in the end they will only increase their own advantage and scrupulously preserve their own privilege. Stop the jibber jabber and get down to a soup kitchen and start dishing.
— Ed.