July 31, 2018 Isidore Gnome
Anyone who has ever been driving and had a collision with a deer or other large animal knows just how devastating it can be for the animal as well as for the driver and any passengers, besides the damage to the vehicle. Every year millions of animals die in collisions with vehicles, though of course only estimates are available on that number, and damage to vehicles comes to over eight billion dollars. The best method for reducing both those numbers appears to lie in building ways for animals to cross roads safely.
France led the way in the 1950s, building overpasses and underpasses for animals to use in crossing busy highways. Other European nations followed, and then Canada and the United States. There is still much to be done in all those countries, and even more in the rest of the world. The animals have a hard enough time navigating a world dominated by people, and they should not also have to risk death in the simple act of trying to get from point A to point B. People do it every day without serious thought of not returning home safely from their journey, though all the other drivers on the roads don’t always make it easy on account of their distractions and reckless behavior.

A spotted deer crosses a road near a “Wildlife crossing” sign in Nagarhole National Park in India. Photo by Chinmayisk. 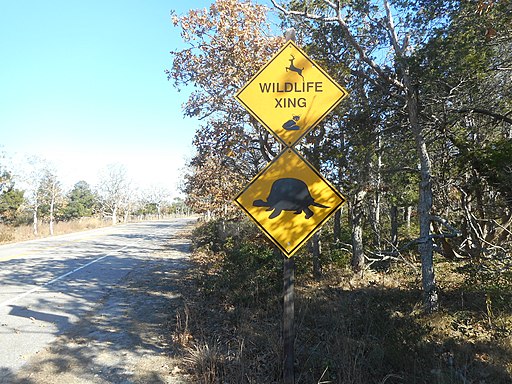 Wildlife crossing warning signs portraying a deer, a fox, and a turtle, in Orient Beach State Park in Orient Point, New York. Throughout the country, signs like this are  often pockmarked by blasts from the firearms of people who pass themselves off as wits. Photo by DanTD.
It makes even more sense to build more safe wildlife crossings when considering it is in our own self interest. A high speed collision between your vehicle and a deer will kill the deer either instantly or harm the deer grievously enough it will die later in great pain, and the collision will also cause thousands of dollars of damage to your vehicle and possible injuries to yourself and passengers, if any, adding up to thousands of dollars in medical expenses, as well as psychological trauma which may make you justifiably jumpy behind the wheel of an automobile from that point on. All this is obvious, and old news really. Why then wouldn’t highway departments across the country do more to mitigate this kind of thing?
A certain kind of person might view a wildlife crossing, be it an overpass or an underpass, and think “Look at all the money the highway department threw away just to protect some stupid animals, probably because a bunch of animal loving tree huggers wouldn’t shut up about it until they built it.” No, the wildlife crossing isn’t there solely for the sake of the animals, and whether a group of people this certain kind of person is contemptuous of pushed for the project is besides the point. The wildlife crossing is there for everyone, for animals to use and for people of every political persuasion to admire as they motor along more safely than they did without it. It is there to save everyone’s lives, and in the case of people it is there to save the treasure they care very much about, possibly more than the well-being of other creatures on this Earth. It is way past time for that certain kind of person to ask who is really the stupid one when it comes to how we cope with animals crossing the road which, as we all know, they will do come what may.
— Izzy