I Hear You Knockin’

July 27, 2018 Vita Historia
After 30 years of dominance on the AM radio dial, conservative talk shows are starting to wane in popularity as their main audience of older white people who live mostly in suburbs and rural communities dwindles as a share of the entire United States population. That is not to say AM radio will make great strides in improving its programming, since so far the slack appears to be taken up by sports talk programs. The demographic groups who enjoy getting their hatred and resentment stirred up by radio hosts such as Rush Limbaugh are diminishing in number, and eventually the radio dollars will turn away from them altogether, and that does represent an improvement.
When the Federal Communications Commission (FCC) removed the Fairness Doctrine policy in 1987, they cleared the way for opinionated talk radio programs such as Limbaugh’s to flourish. The question is – why didn’t liberal talk radio programs gain equal popularity when the rules changed? After all, by numbers alone Democrats are in the majority in this country. The answer lies in two areas relating to the differing mindsets of conservatives and liberals and their uses of media. 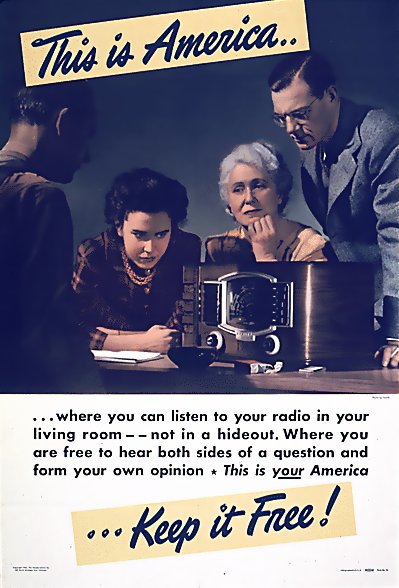 A World War II poster from the Office of War Information. Today’s wording might suggest you are free to listen to the one side of a question confirming your opinion.
The conservative mindset is typically authoritarian and believes in black and white answers to social and political problems, whereas liberals are more likely to see shades of gray. A conservative tunes into a talk radio program with his or her mind already made up in most cases, and is looking merely for reaffirmation from the host, who has proved over the years to be more than willing to oblige, often with a helping of a vituperate diatribe against liberals as a bonus. A liberal is less likely to be persuaded by the simple answers a single radio host can provide in an hour or two.

In an appearance on the PBS program Austin City Limits aired in 1987, Fats Domino and his band perform “I Hear You Knockin'”.

The other answer to the 30 years of dominance by conservative talk radio lies in the demographics of the daytime radio audience. Who listens to the radio during the day? Truck drivers, construction workers, suburban and rural commuters in their own vehicles, farmers in the enclosed cabs of their tractors. In other words, mostly older, white conservatives. Liberals living in the cities are at work during the day, and when they are commuting they often listen to podcasts of a wide variety of programs. Podcasts are a relatively recent development, and are not as popular with older people as the they are with people under 40. People over 40, and especially over 50, listen to live radio. Many of them listen to Rush Limbaugh, and have for decades. They agree with everything he says because he confirms their opinions. There is no room for argument, never mind debate.
— Vita