One Man’s Trash Is Everybody’s Problem

July 3, 2018 Techly DoRight
This summer, archaeologists from The Public Archaeology Facility of Binghamton University in New York State are digging up the site of the 1969 Woodstock Music and Art Fair near Bethel, New York. They hope to uncover an accurate and comprehensive scheme of the place as it was originally laid out for that enormous event nearly 50 years ago, and then turn over their findings to the museum on the site in time for the 50th anniversary in August 2019. Besides broken glass and other relics from the event, the archaeologists dug up numerous pop tops from aluminum beverage cans.
Unlike the stay-tab which replaced it in the late 1970s, the pop top tabs from the late 1960s and early 1970s were meant to be pulled entirely off the top of the can by the consumer. The consumer then had a piece of waste in addition to the waste the can itself would become after emptying, and many consumers simply dropped the pop tops on the ground, where they not only littered the environment but on account of their sharp edges became a safety hazard for anyone in bare or lightly shod feet, as Jimmy Buffett noted in his song “Margaritaville”. Some people dropped the pop tops into the can either while they were drinking from it or afterward, and then some of those people were unfortunate enough to swallow the pop top or otherwise injure themselves when it resurfaced during their drinking. 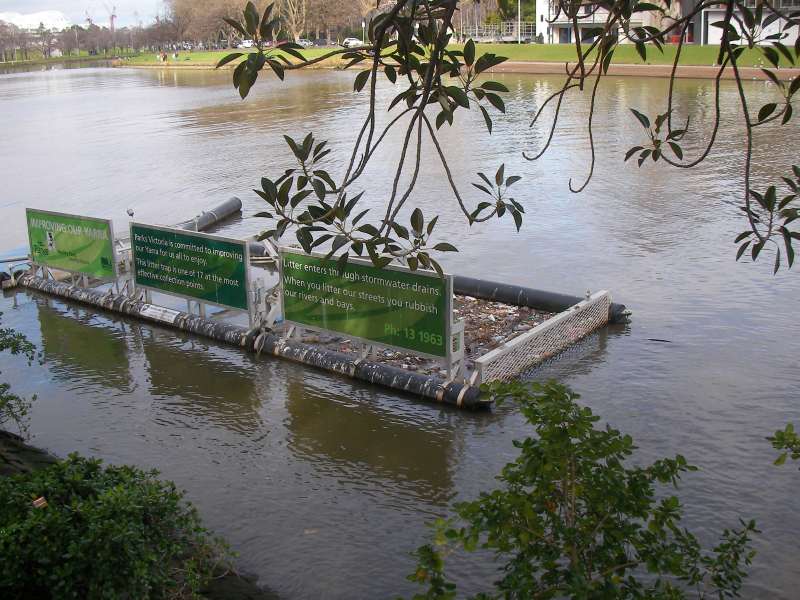 A litter trap on the Yarra River in the vicinity of Melbourne, Australia. Photo by Biatch3.
When a Reynolds Metals engineer named Daniel F. Cudzik invented the stay-on-tab, or Sta-Tab, in 1975, he solved the littering and safety problems of pop tops. Some inconsiderate people still tossed the cans wherever they liked when they were done with them, and unfortunately it appears a certain percentage of people like that will always be among us, but the problems originating from improperly disposed cans have lessened since the 1960s with the adoption of better designs and recycling programs. Since then, and particularly after bottled water took off in popularity in the 1990s, plastic beverage containers have taken over from aluminum cans as a major littering and safety problem.

Engineers and designers have created biodegradable water bottles in the past several years, but so far the bottled water industry has not embraced their inventions, and may never do so without consumers pushing themselves and the industry in that direction. Part of the reason for delay is the relatively abstract nature of the problem for many consumers. Yes, empty plastic water bottles may litter roadsides, where they are unsightly, but they don’t really pose a physical danger to people, unlike aluminum pop tops and cans with their sometimes sharp edges. The physical danger from plastics all seems to happen to animals, many of them far away and out of sight, such as the ones who live in the oceans, where all that plastic garbage ends up and lingers for decades. It was only recently that scientists discovered we, like our animal cousins, are also ingesting plastics, though in our cases we are more dainty in our discernment in that we choose only to take in micro-plastics, meaning those we cannot see. What goes around, comes around, and there’s no escaping it.

In Mike Nichols’s 1967 film The Graduate, Mr. McGuire, played by Walter Brooke, has some advice for Ben Braddock, played by Dustin Hoffman. In a later scene, Hoffman’s character floats on a raft in the pool at his house and sips a beverage from a can which has two v shaped openings in its top, the marks of having been opened with a can opener, or church key, the most common way to open such a can before pop tops became widely available on beverage cans in the mid 1960s.

Most people can be coached to some degree to change their behavior, and once they are understand viscerally that a problem exists because of their past behavior, many of them can become open to change. They have to feel the problem personally, though, because an abstraction doesn’t always get through to them. A minority of others are hardheads, and little can be done to persuade them to change their ways beyond legal sanctions and public shaming. The mounting problem of plastic litter shares this model of personal and public behavior with the looming dangers of a warming climate. For too many people the problems remain abstractions because the effects can be distant, indirect, or slow moving. The rest of us can’t wait for those people to come around, because they may only do so when they are up to their necks in seawater while standing in their front yards, fighting off all the plastic junk bobbing in the water, and obstinately refusing to reconcile their beliefs with what they see and feel around them.
— Techly