The Neighborly Thing to Do

July 1, 2018 Vita Historia
With gentrification occurring in many old city neighborhoods across the country, there has been a rise in calls of complaint to city officials from the new, mostly white, residents about the established, mostly black and brown, residents. New residents usually make those calls to a city’s 311 line, which doesn’t automatically entail a police response, and that’s just as well because out of control police employees are just as likely to escalate a conflict between neighbors as they are to defuse it, particularly since the complainants are pointing their fingers at black and brown people. 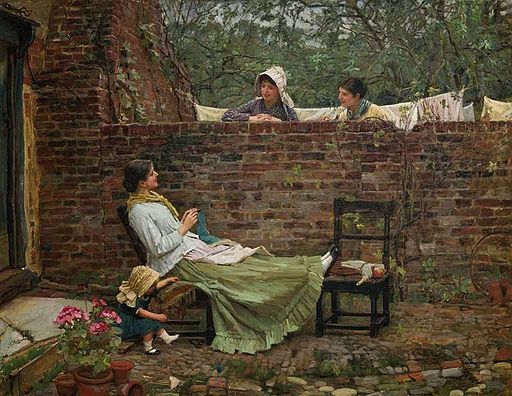 Good Neighbours, an 1885 painting by John William Waterhouse (1849-1917). While not a depiction of an ethnically diverse gathering, still this painting conveys the notion of neighborliness.
Some white folks, but not all, understand the possibly dangerous consequences for black and brown folks of having the police intercede in even the mildest disputes. Those who do understand how it works use the police as their personal enforcers, as a blunt instrument to get their way without having to simply talk with their neighbors. Involving city officials, especially the police, ought to be the last resort, but when you are rarely the target of a blunt instrument it is easy to take the view that it is a first resort.
The new residents in gentrifying neighborhoods have little in common with the established residents, and that has much to do with their reluctance to deal with them one on one as equals. Some are intimidated by people whom they have long been instructed by the greater white society to view as likely criminals, or at least as not worthy of the benefit of a doubt. A black or brown person conducting themselves in a manner not dissimilar to a white person, for instance conducting a house inspection as part of his or her official duties or job, is far more likely to be viewed with suspicion by a white person in the vicinity, with the white person eventually calling the authorities to report those supposedly suspicious activities. The glass half full for white people in this society is almost always half empty for others.
Sesame Street has always been at the forefront in portraying amicable relations among people of different ethnicities. This clip from a 1990s episode features a version of “The People in Your Neighborhood”, a song written by Jeffrey Moss and, since the show’s inception in 1969, usually performed by Bob McGrath and a selection of Anything Muppets representing various occupations.
It seems like this society is sliding backwards, and the rhetoric and actions originating with the current presidential administration are leading the way backward. No doubt that is the meaning behind the slogan “Make America Great Again”. For a few in this society, about one third of the population, going backward appears to mean returning to the days when black and brown people were rarely seen and never heard, and then only in a subservient capacity. One thing they overlook is that in the days before home air conditioning and home theaters, people got out and about amongst their neighbors in the evenings, getting to know each other.

Turn on the captions for the printed lyrics.

Granted, ethnically mixed neighborhoods were never part of life for the upper classes, but the upper classes have always been able to afford their own way of life and rarely cared much at all how the rest of society viewed them for it. Poor and working class people have always had more day to day experience with other ethnicities, though that hasn’t implied an always peaceful coexistence. It seems now that in gentrifying neighborhoods the new residents, wealthier and usually whiter than their neighbors, don’t bother getting to know the poorer and darker people around them, and consequently they are easily disturbed by unfamiliar behavior, calling 311 out of fear or annoyance. The pattern continues until all the established residents are priced out of the neighborhood. What a shame then that the new residents come from all political stripes, some with the best intentions, and yet the ultimate effect they have on their new neighbors reflects the same backward thinking as that of those cynical, small-minded leaders now making policy in Washington, D.C., and that of their frightened, small-minded followers, calling the cops out to hassle their neighbors over every little thing.
— Vita