Many a Tear Has to Fall

Charles Gates Dawes was vice president of the Calvin Coolidge administration between 1925 and 1929, and before that he had a multi-faceted career as a lawyer, banker, soldier, and diplomat. He was also an avid amateur musician who wrote a song in 1911 that he called “Melody in A Major”, a song that Carl Sigman, a qualified lawyer himself, would write lyrics for in 1951 and rename “It’s All in the Game”. The singer Tommy Edwards was one of many performers who recorded “It’s All in the Game” in 1951 and in the years since, but it was his 1958 rendition that reached number one on the record charts and has become the most familiar to listeners. Two other interesting items to note about Mr. Dawes before moving along: He was a descendant of William Dawes, the man who made the midnight ride with Paul Revere in 1775, and he shared the Nobel Peace Prize for 1925 for his work rearranging the German reparations payments for World War I which had been crippling its economy. 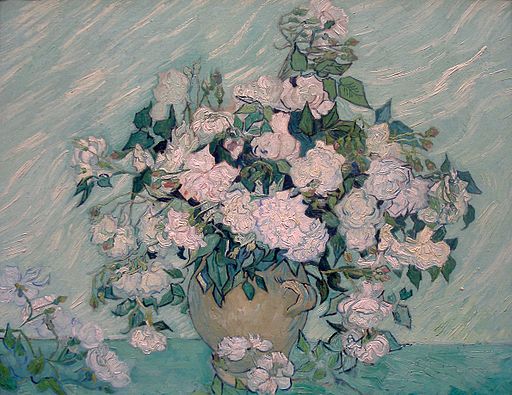 Roses, an 1890 painting by Vincent van Gogh (1853-1890).
“It’s All in the Game” outlined the ups and downs of courtship, and as such would seem to have no bearing on Father’s Day. When we were growing up, we generally caught mere glimpses of the affection shared between our parents. Some people may have seen frequent displays of fondness, others none at all. Seeing our fathers as authority figures, probably the last thing that would have popped into our heads was the understanding that these were men who were seen quite differently, at least at one time, by their partners in marriage. For most of us, the idea would have been difficult to reconcile with the fellow we knew. Later in life, having grown up and gotten a more rounded view of things, we might learn to perceive the side of him our mother knew, and thus understand better why she married him, even though he may have been an ogre or a gent, or most likely a little bit of both and a lot in between. Then if our parents lived long enough while we attained greater maturity, we might get the opportunity to understand them better as people rather than merely as the totems of varying degrees of nurturing and authority we looked up to as children, and realize that the first lines of “It’s All in the Game” embrace us well.
— Vita