Gimme What He’s Got

June 15, 2018 Editor
Much printer’s ink and digital pixels have been expended the past few years by writers and mental health professionals attempting to analyze the current president’s psyche, which admittedly appears to be a mess. Amid all the speculation, two things appear to be certain about Supreme Leader’s mentality, and those are his overarching narcissism and his unhealthy obsession with Barack Obama, specifically with outdoing Mr. Obama if not in deed, at least in Supreme Leader’s own mind and in the minds of his followers. To that end, Supreme Leader is most likely obsessed by the possibility of coming away with a Nobel Peace Prize as a result of his recent talks with North Korean leader Kim Jong-un. 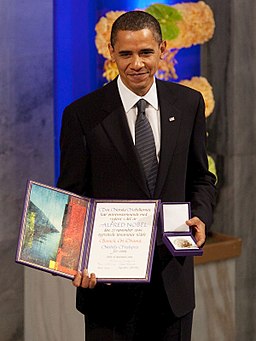 President Barack Obama with the Nobel Prize medal and diploma in Oslo, Norway, in December 2009. Photo by Pete Souza.
Nothing of substance was settled between the United States and North Korea during the June 12 talks, but that apparently hardly matters anymore to the Nobel committee after they cheapened the prize in 2009 by awarding it to the new American president, Barack Obama, for no evident reason other than he was NotBush. Some thought the committee awarded Mr. Obama the prize as an incentive to engage the United States in more peaceful behavior in the future. If that was the case, the committee members must have been chagrined at the very least over the next seven years as Mr. Obama expanded George W. Bush’s drone assassination program, and otherwise did little to validate their faith in his peaceful intentions. Mr. Obama was a tool of the American power elite, charming as his personal nature may have been, and if he hadn’t been the elite would not have allowed him to get anywhere near the seat of power.
No doubt the current president cares little about whether the Nobel committee was misguided in awarding the Peace Prize to Mr. Obama in 2009. All he cares about is that Obama got one, and now he wants one. His childish neediness requires it, and he may possibly be fueled by a need for revenge against his predecessor. None of that really matters to everyone else in the world except in the sense of how they are affected by the whims and personality foibles of a person at the head of the most powerful government and military machine on Earth.

An excerpt from the White House Correspondents’ Dinner in April 2011.

Some of the Roman emperors in the first few centuries of the Christian era were also mentally unstable individuals who led capriciously and selfishly. None of them had the powerful weaponry at their disposal such as that available to the current leader of the United States, and on the other hand they did not have the constraints on their exercise of power equivalent to those put in place by the founders of the American republic over two centuries ago, eroded as those constraints have become. The peasants of the empire still need to go about their business every day, and can do so today just as peasants did thousands of years ago largely unaware or unheeding of what was happening at the central seat of power, with the difference being that now far more more than then a disastrous decision by a mentally unbalanced person at the helm has the capacity to upend their lives. The deluded Roman emperors also sponsored games and awarded themselves prizes, but there is no evidence the lives of the peasants under their dominion were any better for it.
— Ed.