June 1, 2018 Editor
The title of this post is of course a riff on the infamous remark made by President George W. Bush in the aftermath of Hurricane Katrina in 2005 when he praised his appointed leader of the Federal Emergency Management Agency (FEMA), the inept Michael Brown. After Hurricane Maria devastated Puerto Rico last September, the current president latched onto the unusually low death toll number of 16 as evidence the destruction was not all that bad and didn’t require the full measure of emergency response from the federal government. This week, a new study published in The New England Journal of Medicine puts the death toll at a much higher number, possibly near 5,000, making Hurricane Maria the second deadliest hurricane to strike the United States or its territories after the Galveston, Texas, hurricane of 1900 killed over 6,000. 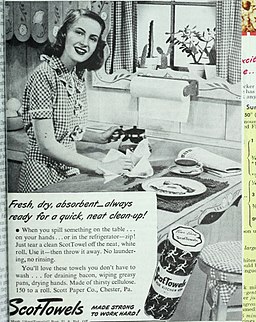 A 1948 advertisement for paper towels in The Ladies’ Home Journal.
How did the number of fatalities related to Hurricane Maria climb from 16 to 5,000? A good part of those who died were victims of the dysfunctional infrastructure on the island after the storm, and they succumbed over weeks and months due to lack of power for medical equipment, poor emergency response due to destroyed roads, overstretched hospital facilities, and lack of wholesome food and clean water. Many of the dead were not accounted for in the first days after the disaster, and government officials were either negligent or overly optimistic in placing their faith in the early number of a mere 16 dead after such a major disaster. Some in government, like Supreme Leader no doubt, used the low number to justify their lackadaisical and incompetent response to the crisis.
Americans have short memories, and government leaders count on that trait in the near term after any crisis in which they might be held accountable. Put a rosy spin on things, no matter how unrealistic, and more often than not after some argument from the press the commotion will die down and eventually be almost entirely forgotten by the public. That’s how the Big Lie works. In the current American political climate, one third of the people will believe whatever lie Supreme Liar pops off, like paper towel rolls he tosses to his adoring fans, no matter how ugly and detached from reality those lies are, because they reinforce their own self-serving beliefs; another third of the people don’t care much one way or the other as long as it’s not their power that’s shut off; and the last third of the public sputters and fumes about the situation, but finds it can be an uphill struggle on a slippery slope to keep the lies in front of anyone who will listen, be outraged, and help refute them. The lies from this presidential administration keep piling up, a malodorous mountain of them, swarming with flies. It will take more than some paper towels to clean it up.
— Ed.