May 25, 2018 Techly DoRight
Following up on a story from last December in which some gamers involved an innocent man in their dispute by calling in the police on a phony hostage situation, ultimately leading to the innocent man being shot dead by a police employee, two other gamers as well as the one who made the call are now facing federal charges. While it’s encouraging to see authorities taking this incidence of swatting seriously, it is not surprising to learn that the local district attorney in Wichita, Kansas, where the killing took place has decided not to prosecute the police employee who shot the innocent man. Andrew Finch came to the door of his house when police called him out under the impression that he was armed and dangerous based on the hoax phone call and, when in his confusion he moved toward his waistband, one trigger happy protector and server shot him dead.
It is no longer unusual for police in this country to overreact to situations and escalate them into unnecessary uses of deadly force. What marks the situation involving Andrew Finch as somewhat unusual is that he was a young white man, and even he was not given the benefit of the doubt. Had he been a brown or black person, he might have been killed even sooner. Police employees increasingly show an appalling lack of discernment in their interactions with the public as a whole, and in their interactions with minority groups it appears the shoot first and ask questions later rule is definitely in force. They behave this way for a number of reasons having to do with their hyper macho culture and us versus them mentality, but the most important reason is simply because they know they can get away with it. 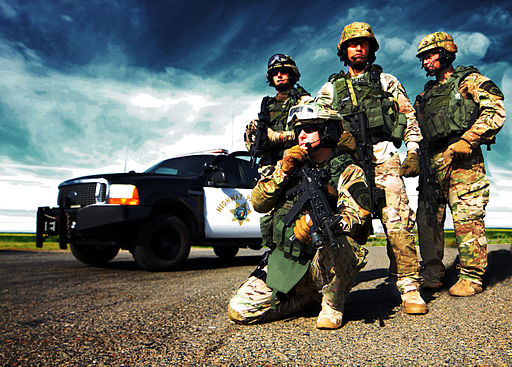 What’s wrong with this picture? It’s likely the question has never occurred to the members of the California Highway Patrol (CHP) Special Weapons and Tactics (SWAT) Team depicted here getting down with their bad selves. Photo from CHP social media.
Of course the district attorney in Wichita is not going to prosecute the police employee who killed an innocent citizen simply because that employee had no common sense and perhaps had delusions of being garrisoned in a combat zone, where everyone but your fellow cops is a suspect. Who knows what goes through the minds of these testosterone hyped, jumpy confrontational cops? All the local district attorney knows is that he or she has to work hand in glove with the police department every day in the prosecution of cases, and their cooperation and good will is necessary to get that done. Prosecution of derelict police employees should not be left up to local district attorneys, but to a panel of citizens who can appoint an independent counsel. 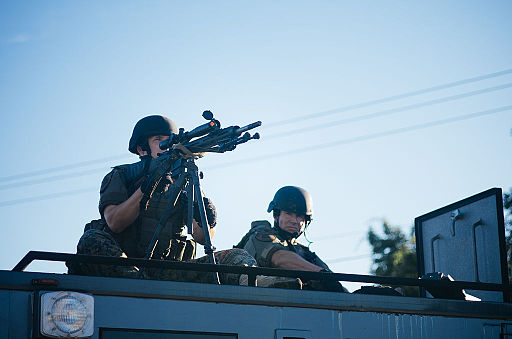 Police sharpshooter at the protests in Ferguson, Missouri, in August 2014. They take all the expensive equipment the taxpayers hand them and then turn those taxpayer funded guns and vehicles on their fellow citizens. Photo by Jamelle Bouie.
People, particularly white people, are more and more coming to the understanding that the police are blunt instruments with no discernment of their own, and they are taking advantage of that proclivity to sic the police on minorities the same as they would sic a vicious dog on someone. Black and brown people have unfortunately always understood this. The police seem all too willing to play along in most instances, particularly when it gives them the opportunity to lay a beating on some brown or black people. This phenomenon of calling on the police so that they may function as thuggish enforcers for the propertied class rather than as impartial guarantors of the public safety comes courtesy of all the police unions and police departments and local district attorneys who refuse to hold police employees accountable in any way to satisfy the rule of law they are sworn to uphold. A paid vacation and a desk job until things blow over is not only nowhere near enough accountability to the public, it is a sick joke amounting to a slap in the face of the citizens they purport to serve and to protect.
— Techly