May 18, 2018 Isidore Gnome
“The smell of good bread baking, like the sound of lightly flowing water, is indescribable in its evocation of innocence and delight.” — M.F.K. Fischer (1908-1992)

Supermarkets are often not the most appealing places, despite the efforts of the owners to entice buying by using attractive layouts and presentations, but the one biggest sales pitch they can offer is a byproduct of their work, and it is the alluring smells emanating from the bakery section, early in the morning especially. It is an amazing occurrence that in an otherwise stale, uninteresting place, the aroma of bread baking should catch our noses and take us to a comforting place of memory or imagination and draw us toward it, if not to buy, to at least inquire of the baker what is in the oven at the moment that is wafting toward us such heavenly smells. 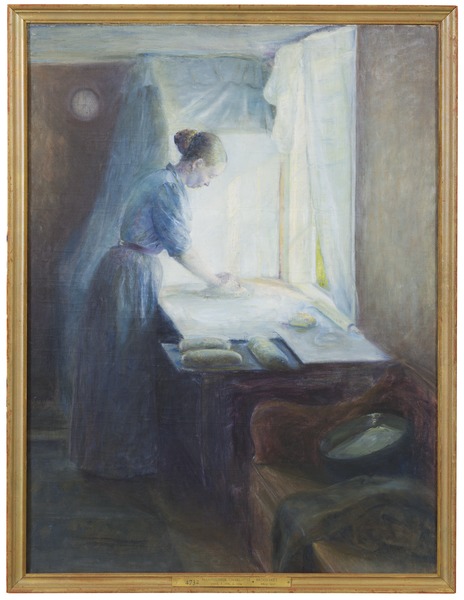 Bread-Baking, an 1895 painting by Charlotte Mannheimer (1866-1934).
The sense of smell is more closely and directly tied to the sense of taste and of memory than are the senses of vision, hearing, or touch, and that is understandable when we consider that it is a chemical sense which cuts to the essence of things quickly. No one, after all, has suffered intestinal distress from eating something merely because it looked unappetizing. Should I eat this? It looks okay and doesn’t feel strange other than being a bit soft, and of course it doesn’t sound like anything, but it smells a little off. No, I will not eat it. Useful information to have before putting the substance in one’s mouth and possibly ingesting something sickening. It’s why smell is tied so closely to taste that people who have lost the sense of smell, as can happen in old age, also lose the sense of taste, and therefore appetite.
Why smell and memory should be linked tightly together is more of a mystery. An American who has visited France and smelled the aroma of freshly baked baguettes might have memories of that visit elicited unbidden simply by walking past an excellent bakery in this country early in the morning as various breads are baking in the shop. The nose will pick out the one particular smell and, with its direct link to memory, evoke that long ago trip anew. What evolutionary purpose could that serve? It perhaps rings back to a time when we weren’t the highly visual creatures we are now, and instead relied on smell to tell us whether something we were encountering currently had positive or negative connotations in our memory. 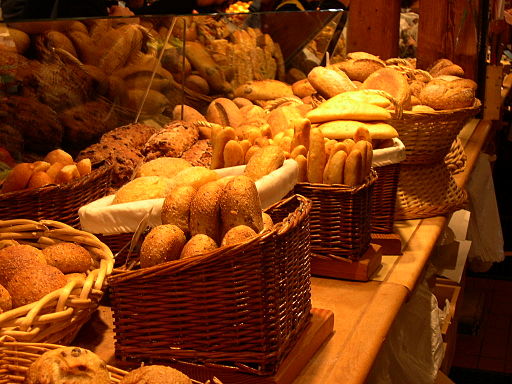 Freshly baked bread for sale at Granville Island Markets in Vancouver, British Columbia, Canada. Photo by Schellack.
It’s helpful to realize that the connection of the sense of smell with the brain takes place at the core level, whereas the sense of sight was layered onto the brain later in our development. That should also help explain why the inextricable connection between smell and memory often eludes our ability to describe it in language, a much later cognitive development even than sight. Smell, it seems, bypasses our more sophisticated powers and goes directly to our emotions, the core of our animal being that we share with millions of other creatures on Earth. When we smell good bread baking, we don’t need to intellectually analyze our reactions our wax poetic about it, describing the situation in a million flowery words, because our brains, nervous systems, and our entire bodies take care of telling us what we need to know. For many of us, our involuntary reactions of mouth watering and imagining of savory yellow butter melting into warm slices of bread will lead us into the shop to make a purchase, staving off for the day the hunger of the beast within us, and rewarding us with pleasant memories for days in the future when that heaven-sent smell wafts our way again.
— Izzy