No Room for Argument

May 15, 2018 Techly DoRight
Instant replay started in 1963 as a way of enhancing television viewing of sports contests when the initial action might have been too quick for sports fans watching at home to catch, or if they had been called away from the television momentarily. In the 1980s the National Football League (NFL), always the most technocratic of the major sports organizations, adapted the technology of instant replay to the sidelines of games, where referees could review controversial plays and possibly overturn the call on the field. It seemed like a good idea at the time because fans had always enjoyed second guessing the calls of officials in all sports, and since fans had access to instant replay and the ability to validate their second guessing, it seemed only natural and right to make the technology available to officials in order to set things right on the field.
30 or more years and many thousands of humdrum hours later, has all the insistence on exactitude done anything to improve sports over what it was before the intrusion of technology? The officials are given the opportunity to rectify calls, but at the cost of slowing athletic contests down to a crawl and boring the casual viewer to the point of changing the channel or not attending a game in person ever again. Some percentage of viewers, perhaps a minority (it’s hard to say, since statistics aren’t available), are satisfied that the official calls are correct, and everyone else could not care less. Meanwhile, the progression appears to be for adoption of instant replay in the officiating of more sports. 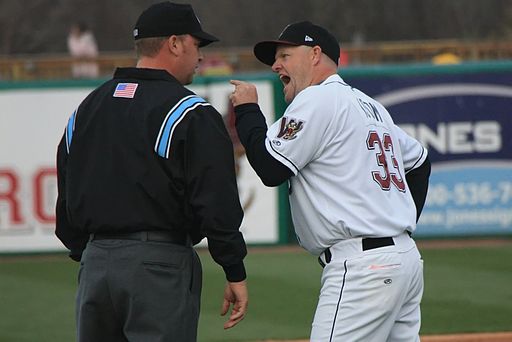 In a 2012 minor league baseball game, Jeff Isom, then the manager of the Wisconsin Timber Rattlers, argues with an umpire over a close call. He was later thrown out of the game. Photo by Wisconsin Timber Rattlers team photographer.
“I Wish”, by Stevie Wonder, from his 1976 album Songs in the Key of Life, is about his childhood in the 1950s and early ’60s.

Video technology is a useful tool in areas that really matter in people’s lives, such as the interactions between police and citizens, but it’s overuse for trivialities like sports shows a lack of perspective in our society. Most people are casual fans and do not live and breathe on the outcome of an official’s call in a sporting contest that ultimately means nothing in their lives. For the sake of satisfying the fanatic interest of a minority of die-hard enthusiasts, the major sports leagues are choking off the interest of casual fans. The leagues seem to understand this, but are determined to milk as much merchandising income from their devout followers as possible and that means keeping them happy at the expense of losing peripheral fans. Major League Baseball (MLB), the most traditional of the sports leagues, must have known this when it discarded almost all daytime playoff games a generation ago, and with that decision discarded cultivating the interest of youngsters who couldn’t stay up until midnight to watch a game stretched out to three or four hours. Arguing with parents about bedtimes has for many young sports fans replaced arguing about the minutiae of the games with their peers.
— Techly