May 1, 2018 Techly DoRight
Ahhh, wundaful west and wewaxation, as Elmer Fudd might have said, referring to wonderful rest and relaxation. As the weather warms, there can be few finer ways to gain satisfying rest and relaxation than lying in a hammock. Scientists have not studied a great deal the quality of sleep we get while in a hammock, but what little they have gleaned is that the rocking motion of a hammock along with the lack of pressure points on the sleeper’s body promotes deeper, more restful sleep than average. 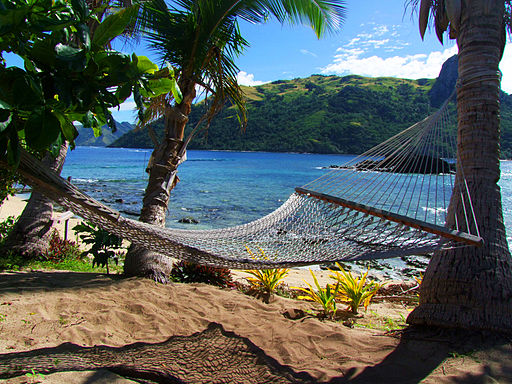 Ahhh, living the dream! A hammock on Kuata of the Yasawa Group of islands in the Western Division of Fiji. Photo by Isderion.
Hammocks are not sophisticated technology, though there are options available now with some technology such as lights built into them. A hammock in its basic form without a stand, the kind meant to be strung between two trees or posts, is sleep technology going back centuries and invented in the New World. A net of ropes, sometimes with a length of fabric woven in and sometimes using spreader bars at both ends for the ropes, is suspended from two supports like a sling for the sleeper or napper. It is the sling suspension that does away with pressure points. There is not a lot of hard scientific evidence to support the claim, but people with joint problems such as arthritis do often report the lack of pressure points helps them sleep more comfortably. Judge for yourself if and when you have the opportunity to doze off in a hammock.
How is it that after all the years of technological expertise and research spent on improving conventional beds, the simple hammock remains a more comfortable way to rest yet has never seen widespread adoption for every night sleeping except among sailors on old sailing ships or campers staying in the woods? The portability and light weight of hammocks has worked to their advantage for both sailors and campers, but for people in homes that hasn’t mattered as much as permanence and ease of entry and exit for old people and invalids. It is also pretty nigh impossible to engineer a hammock for comfortable long term use by two people at once. In the home, therefore, the hammock has been relegated to the same niche of peculiarity as the bean bag chair, more so really, since the great majority of folks consider hammocks suitable for outdoor lounging only.

What a shame then that the better quality sleep and more comfortable lounging afforded by hammocks is experienced by many only on summer days in their backyard or on vacations to warm resorts. Though a soothing experience, it’s not entirely idyllic. Going to sleep outdoors under the stars makes for a good snooze until the small hours, when it often gets chilly and dewy. For those lucky enough to have a deep, covered porch on their house, the six to eight foot deep kind that is styled more properly a veranda, and is rarely built even on expensive houses anymore since the general adoption of air conditioning, those lucky folks can sling hammocks outdoors under the eaves, which help to keep the dew from settling on them as they snooze happily away, perhaps pulling a light blanket closer around them to ward off the chill before dawn. A comfortable hammock, a book printed on paper, and a tall, cool drink make summer heat bearable, and all three can be a respite from the technological world we inhabit now.
— Techly